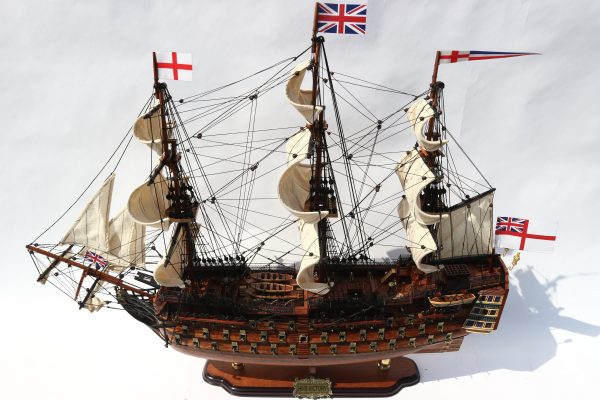 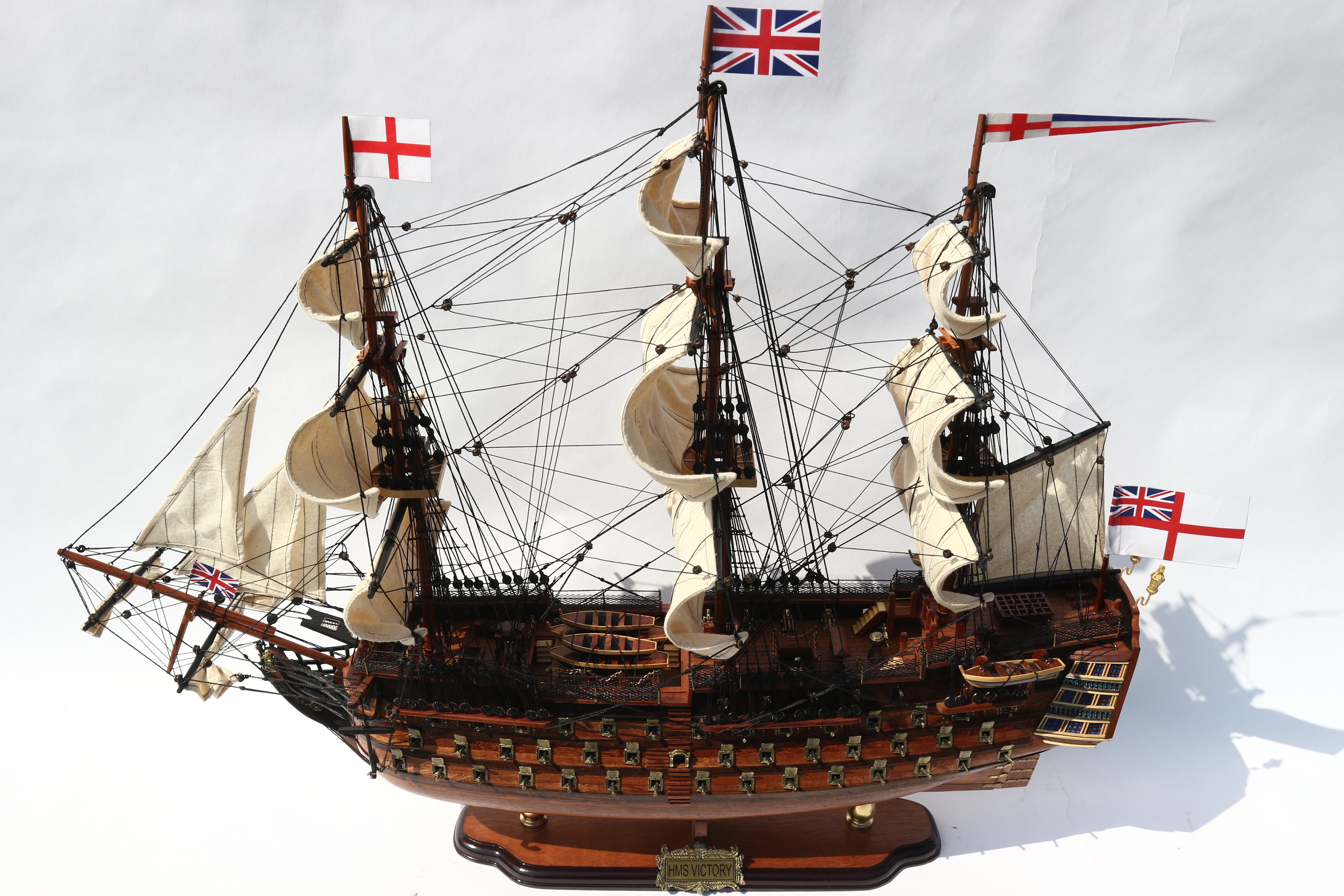 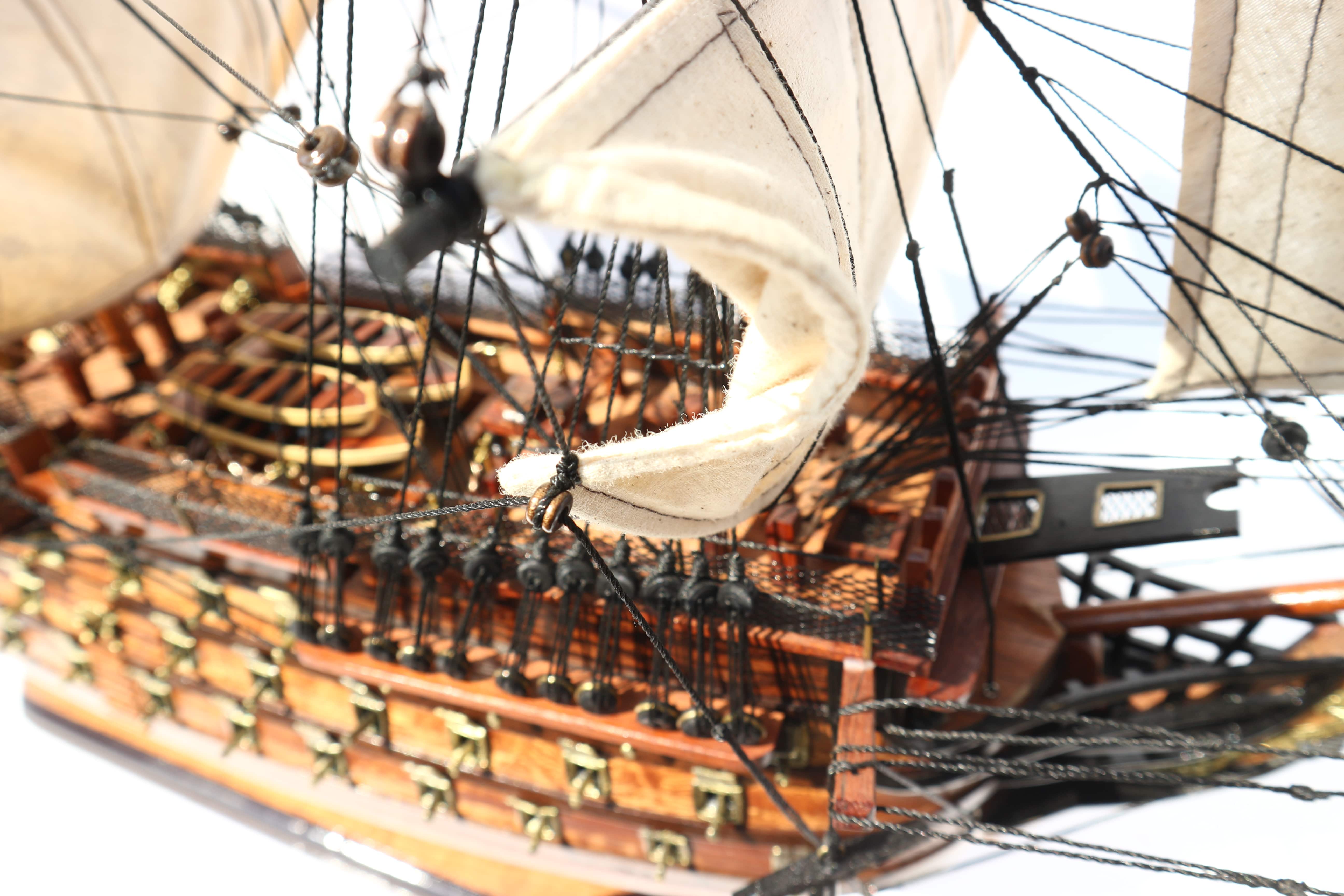 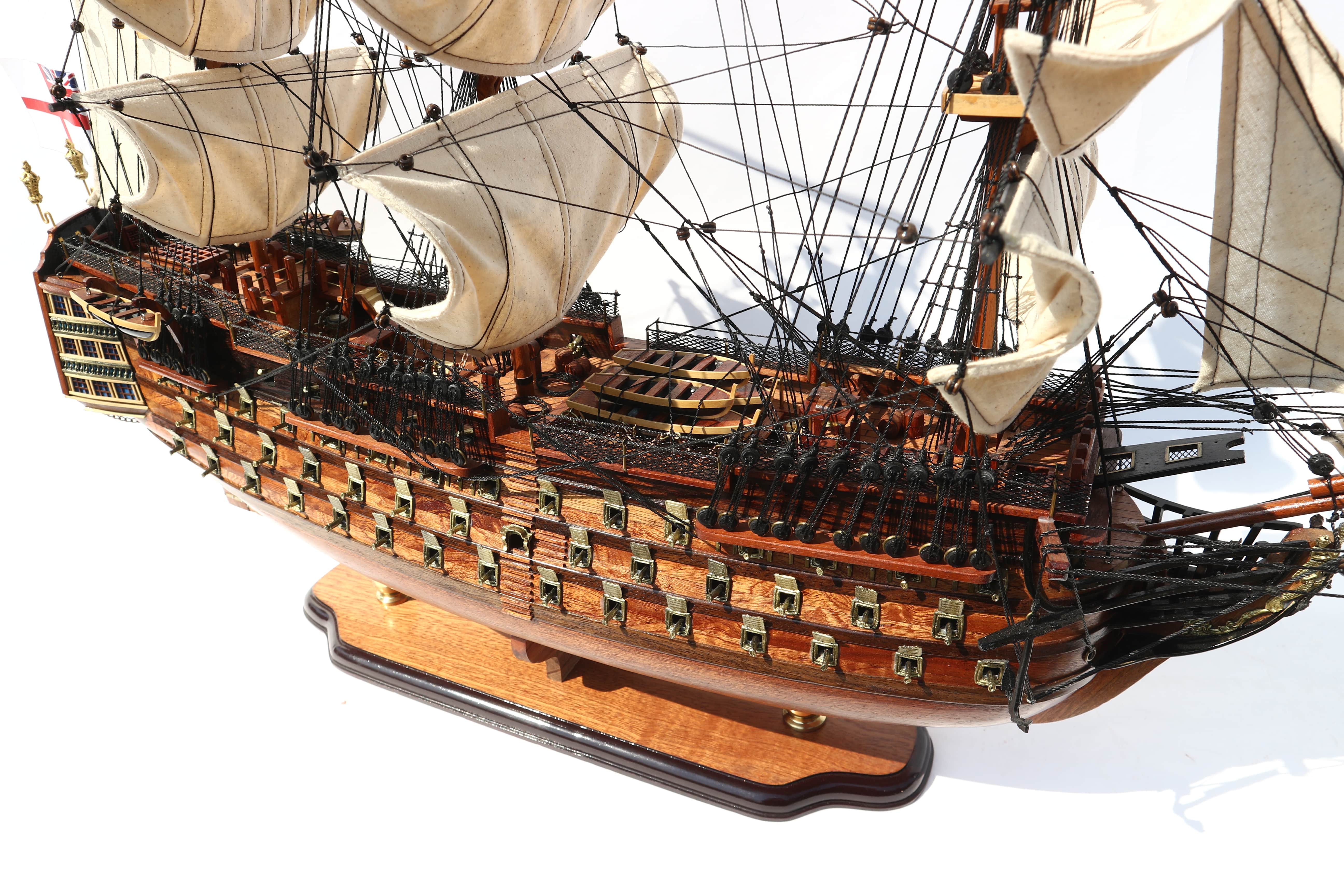 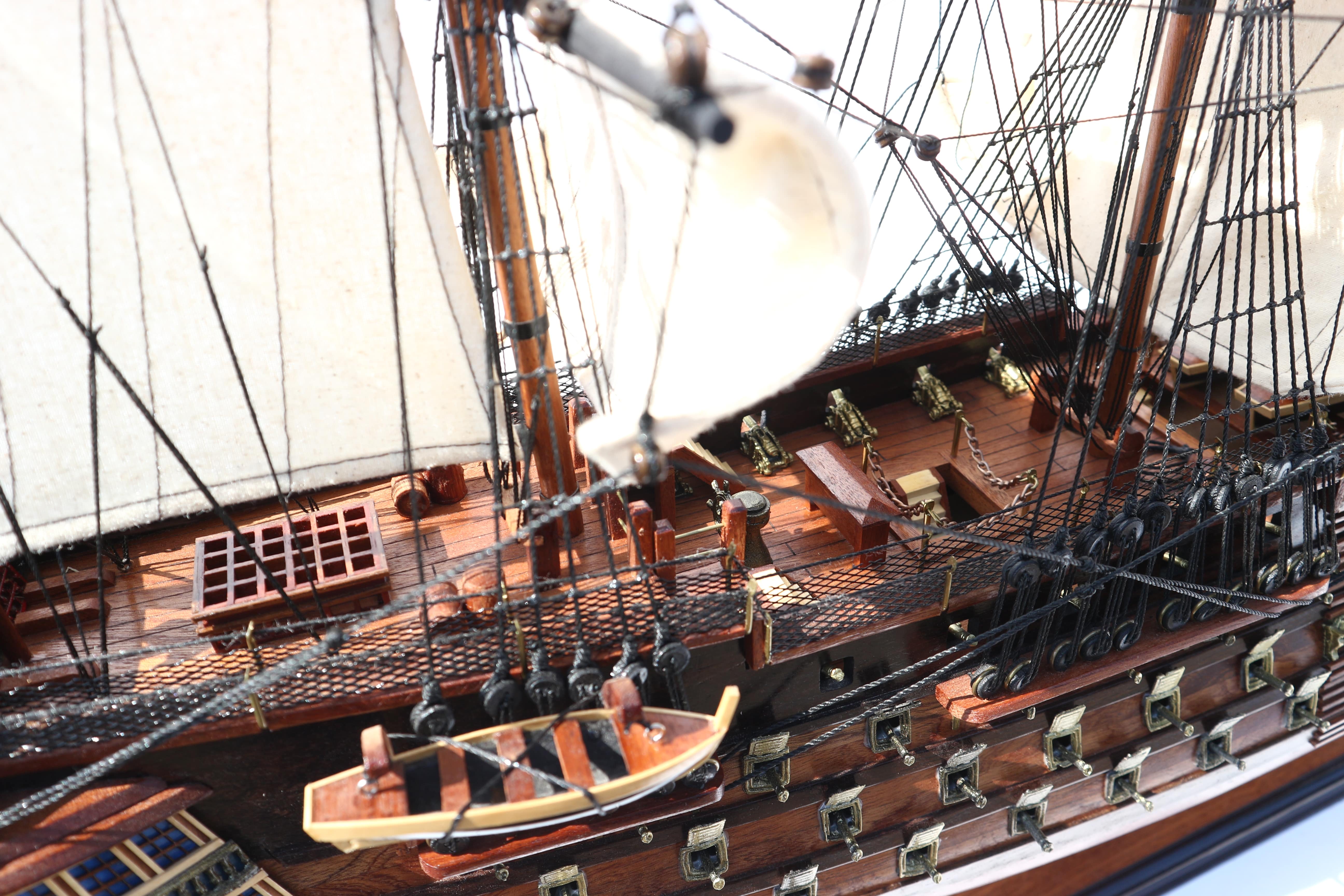 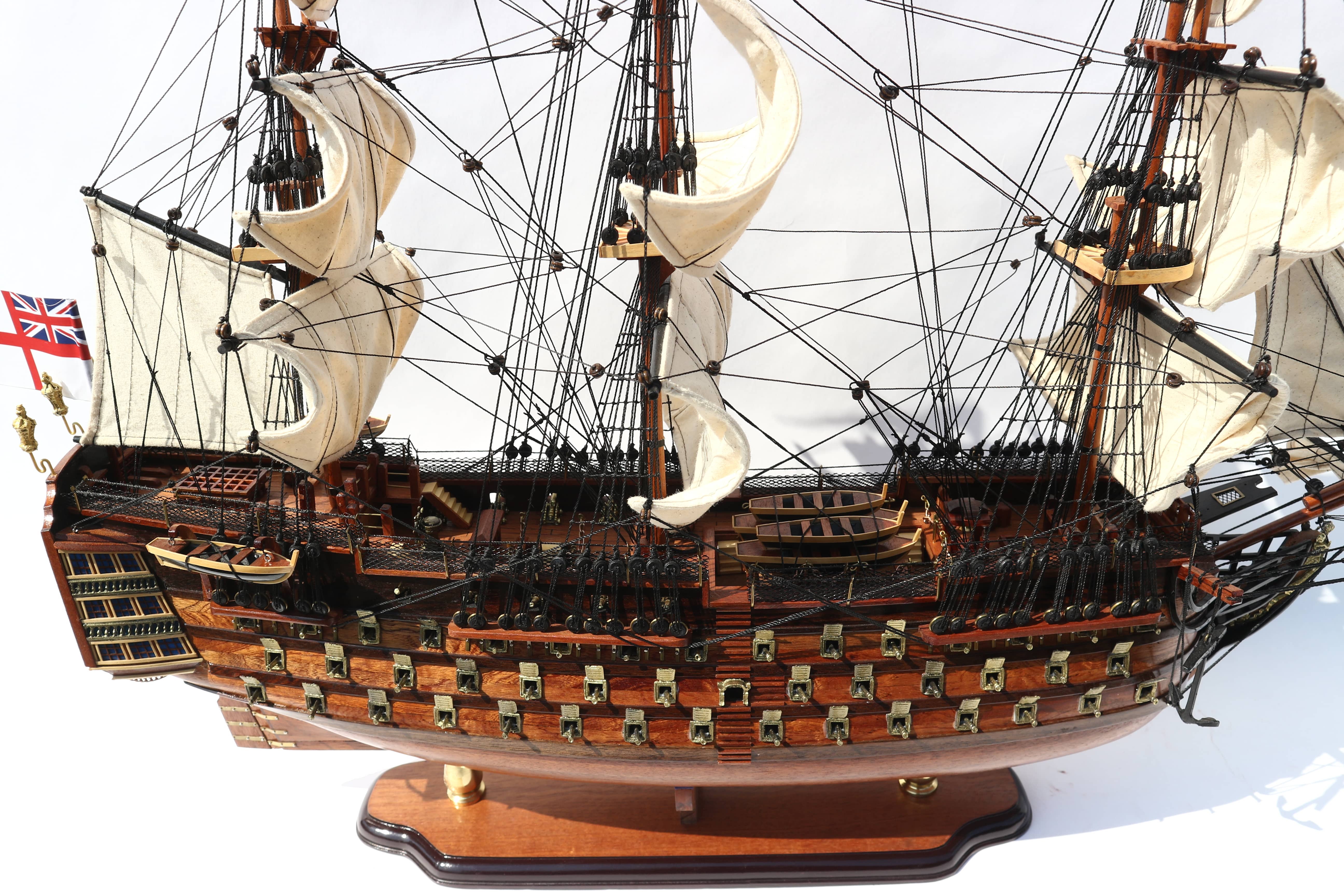 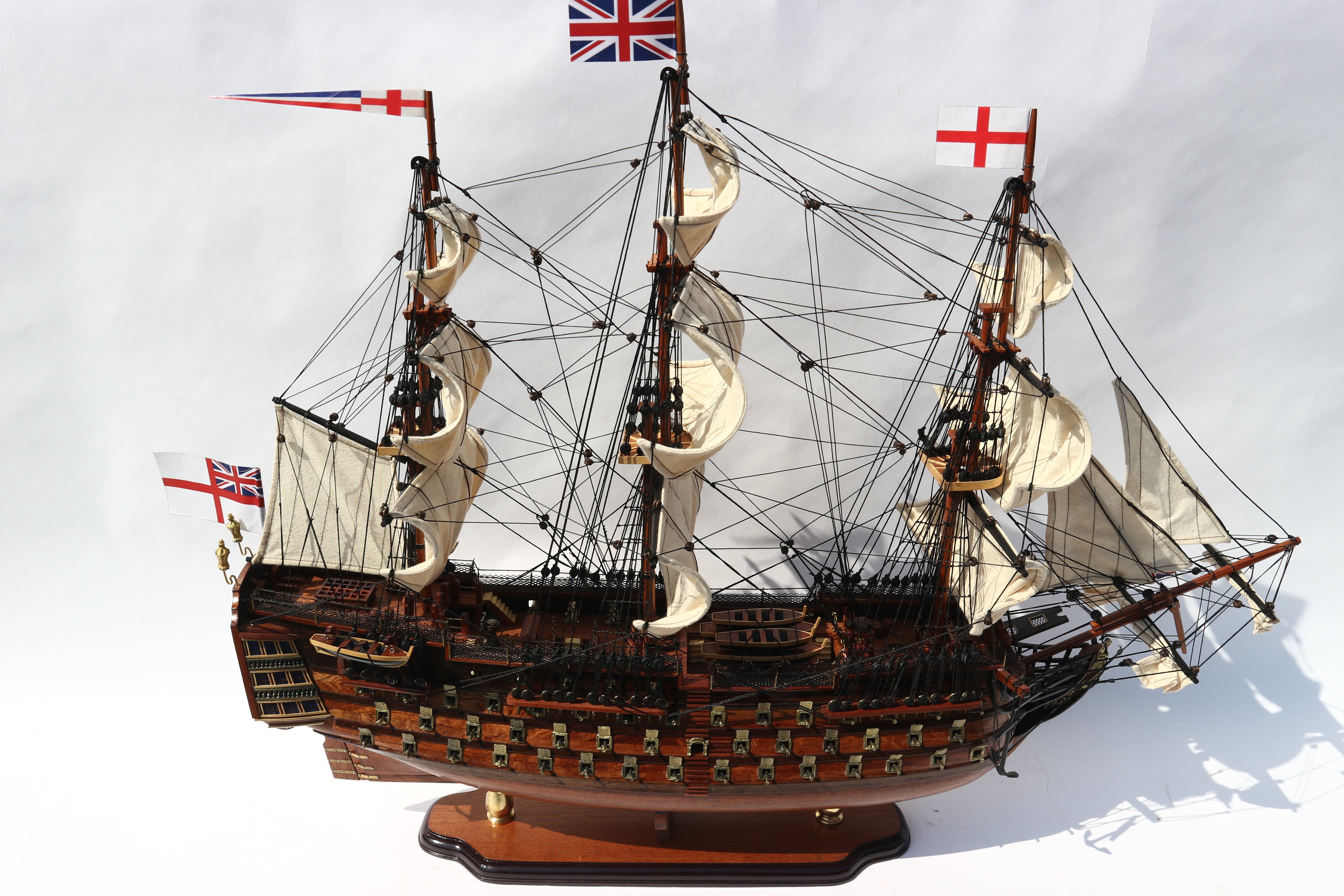 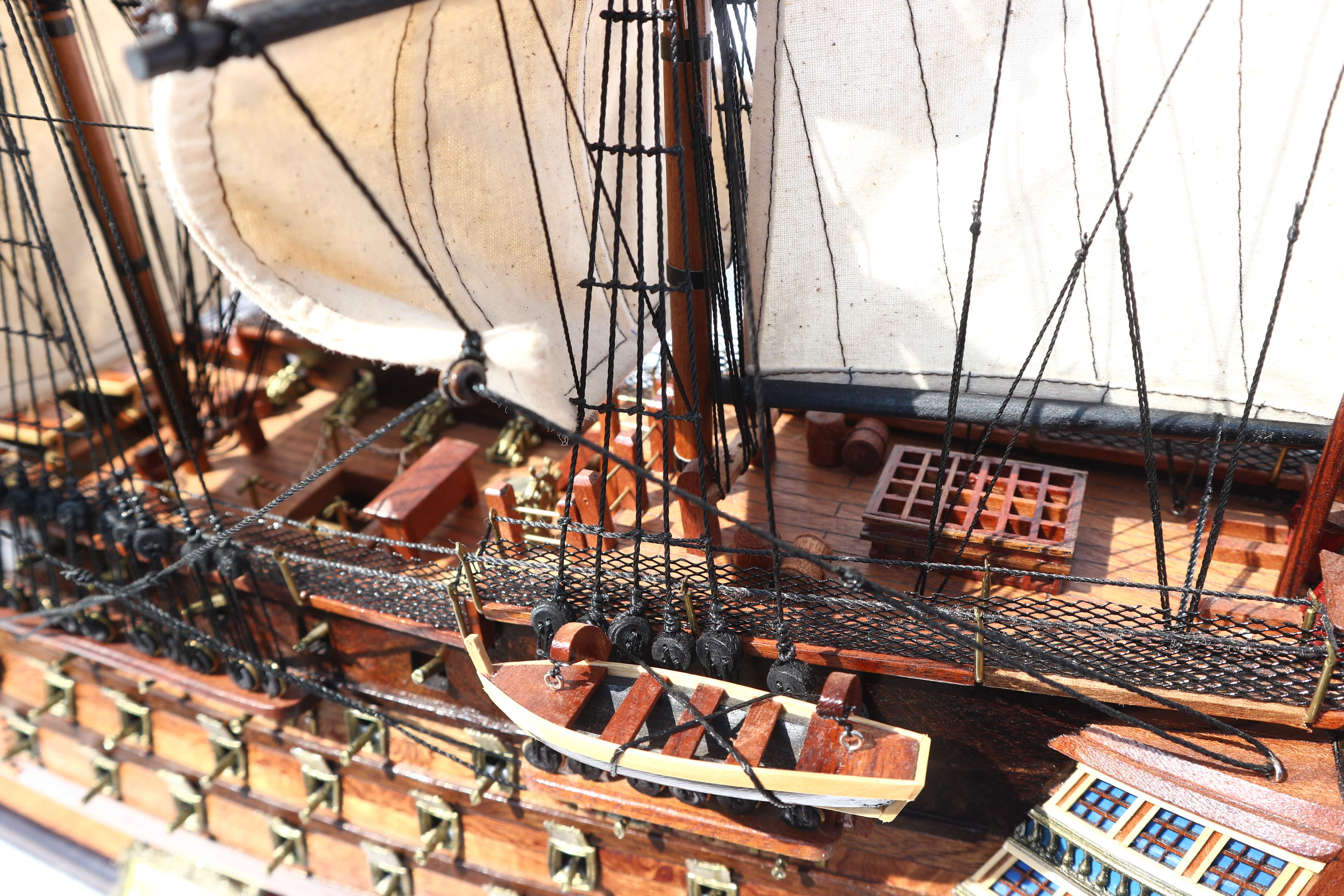 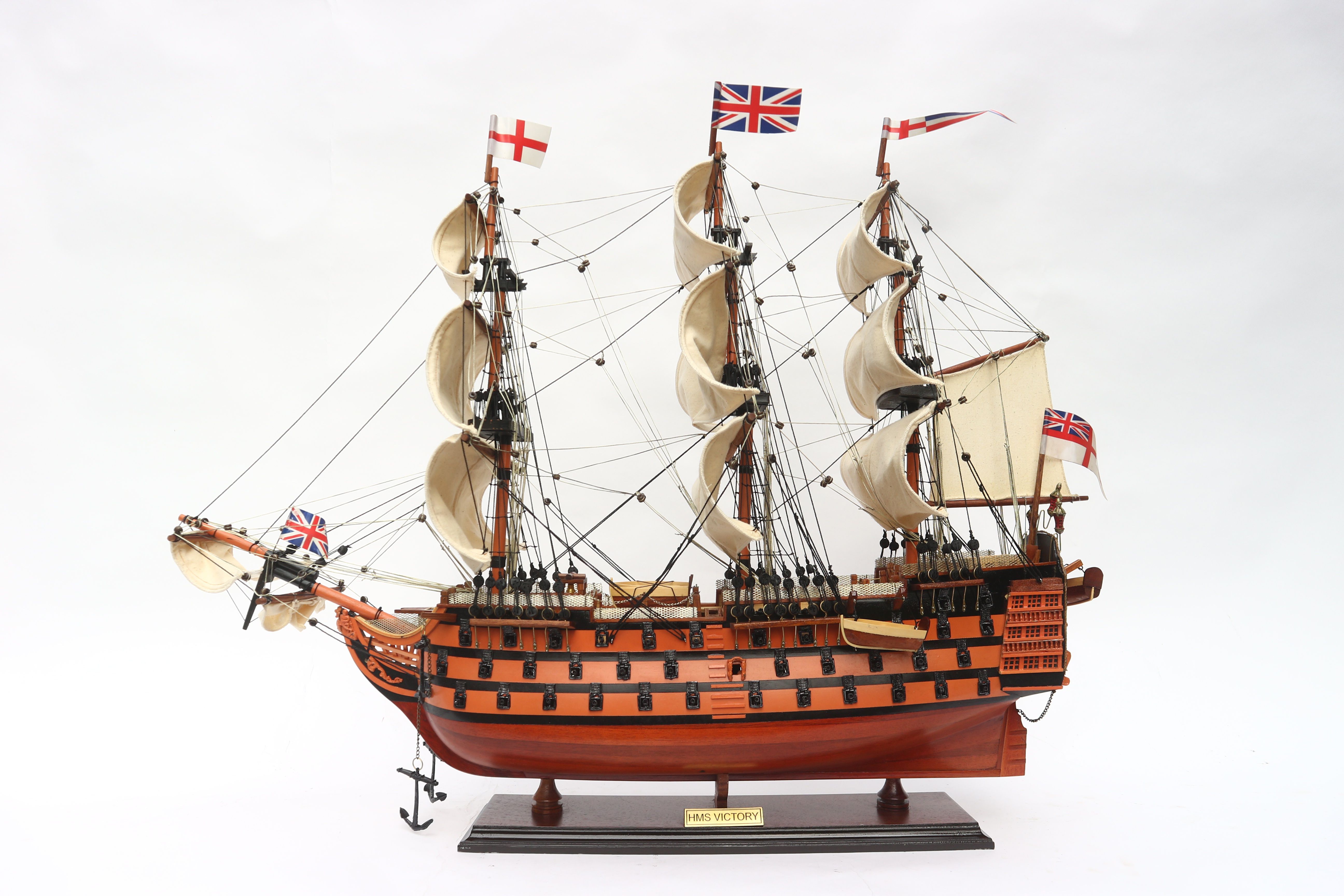 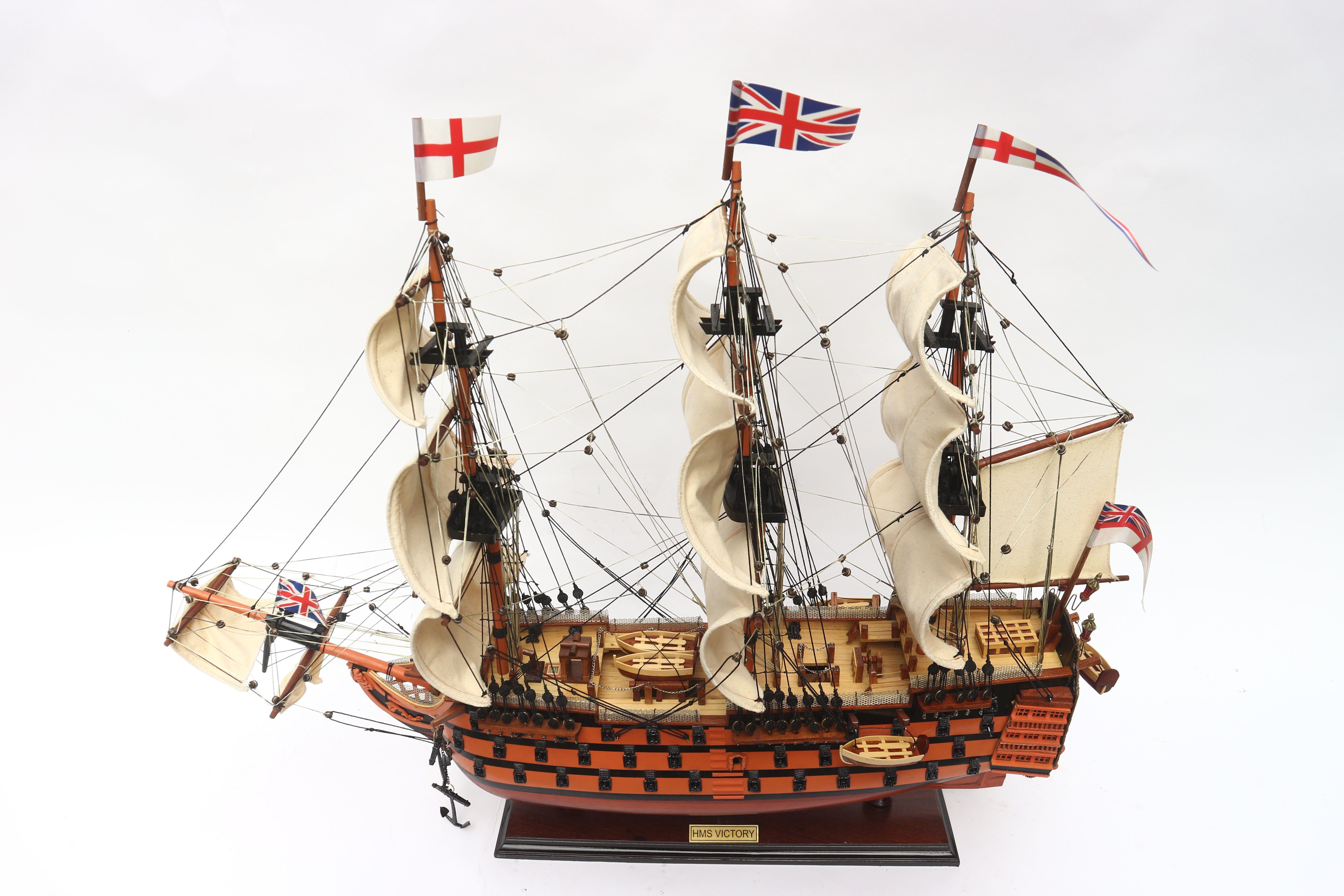 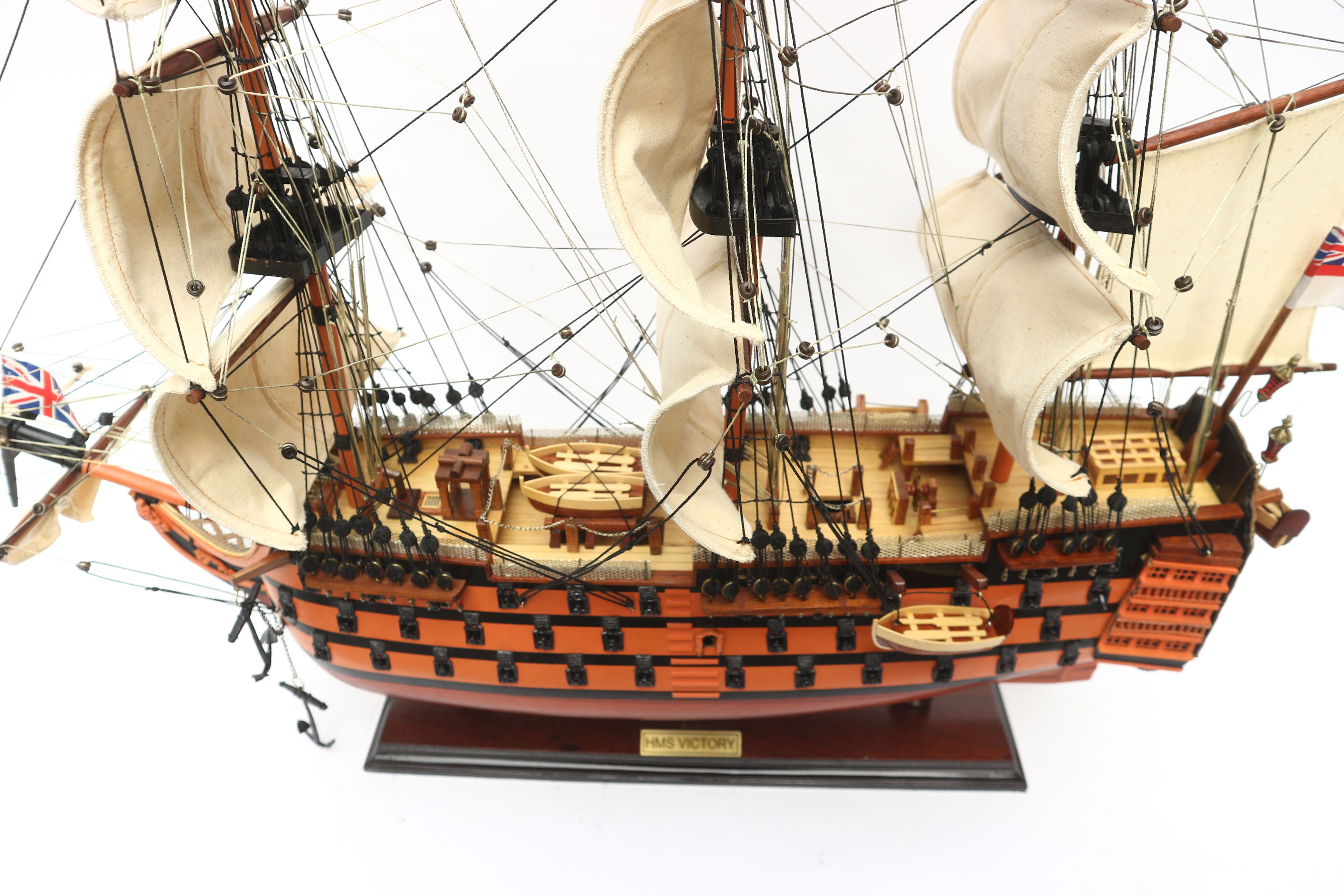 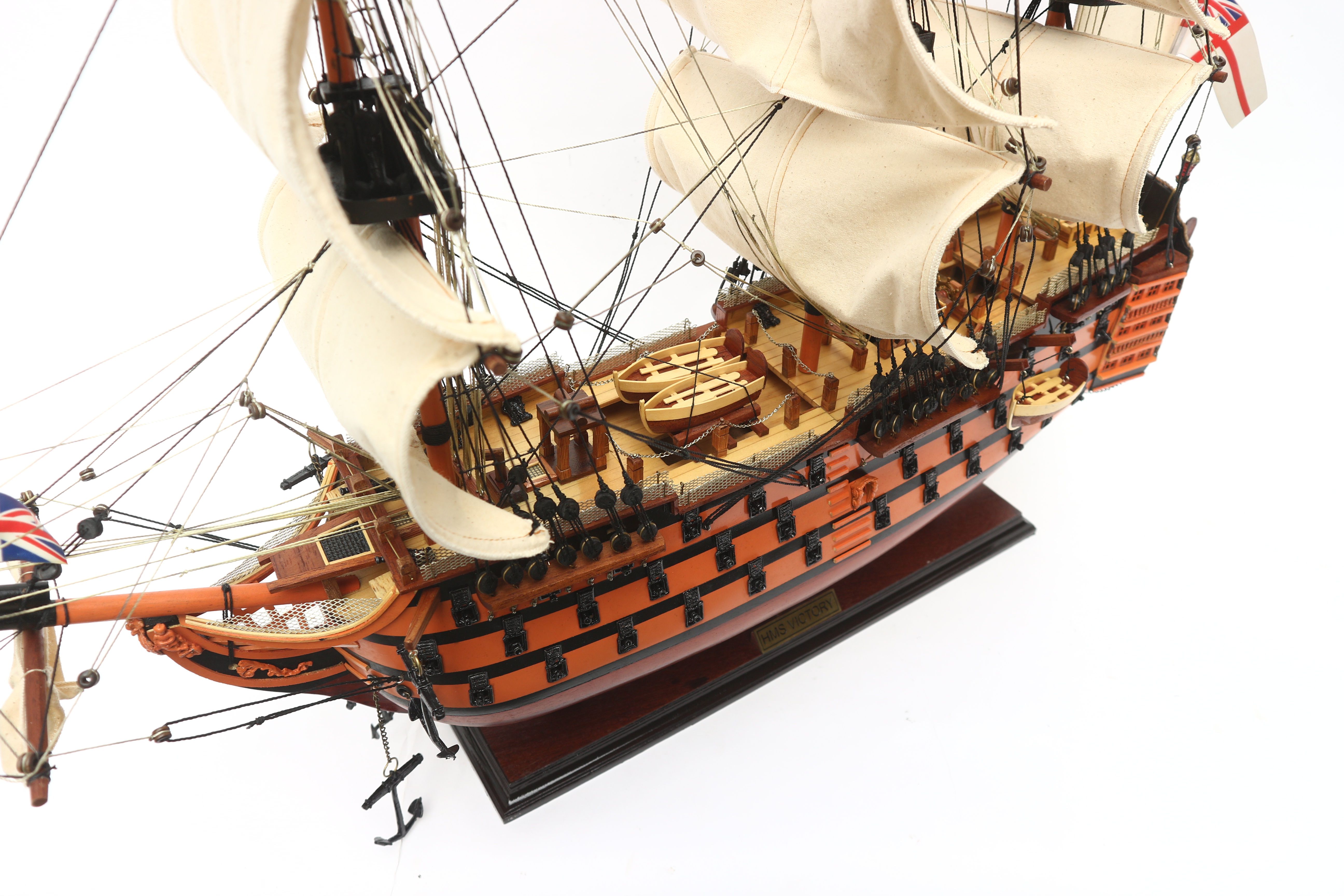 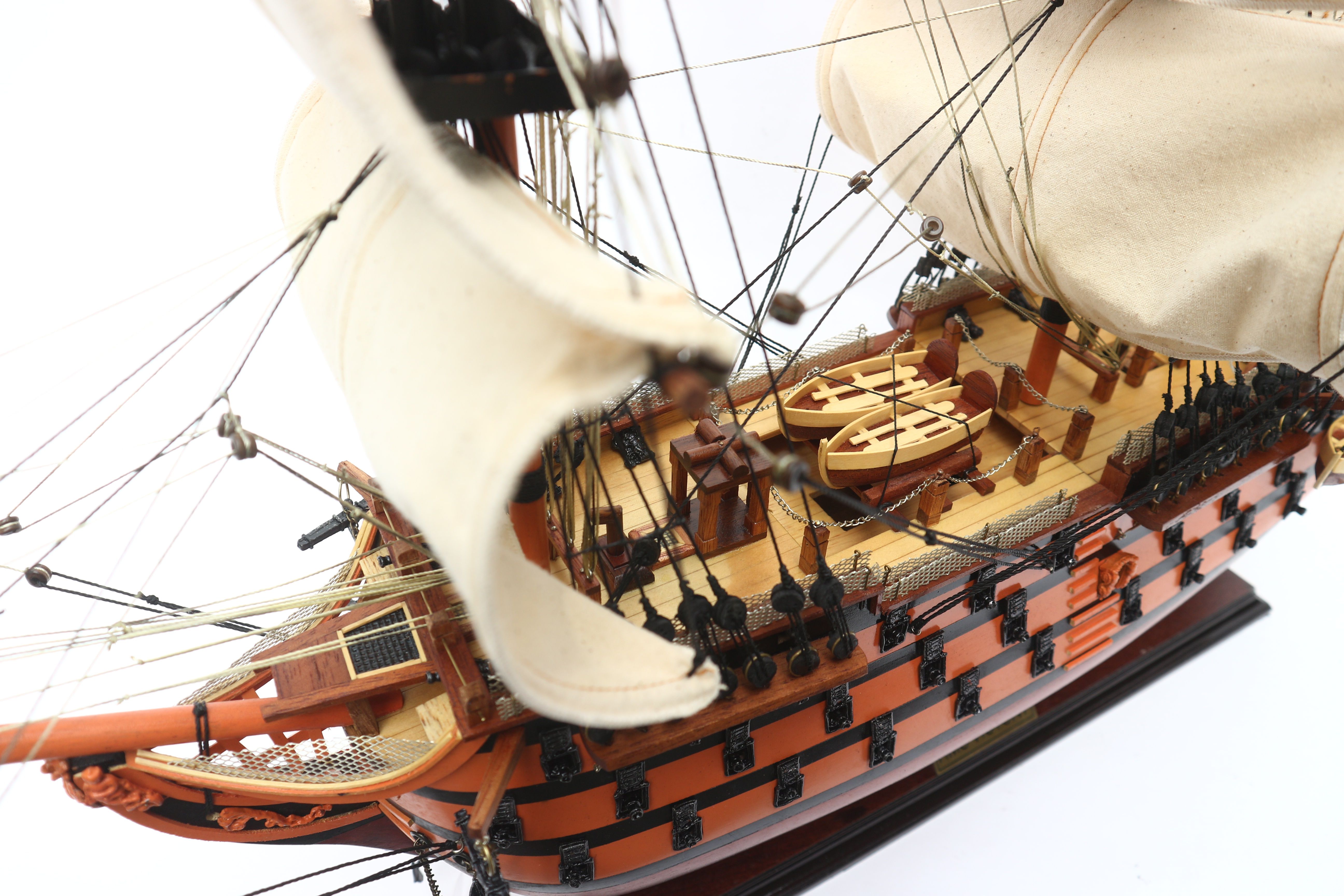 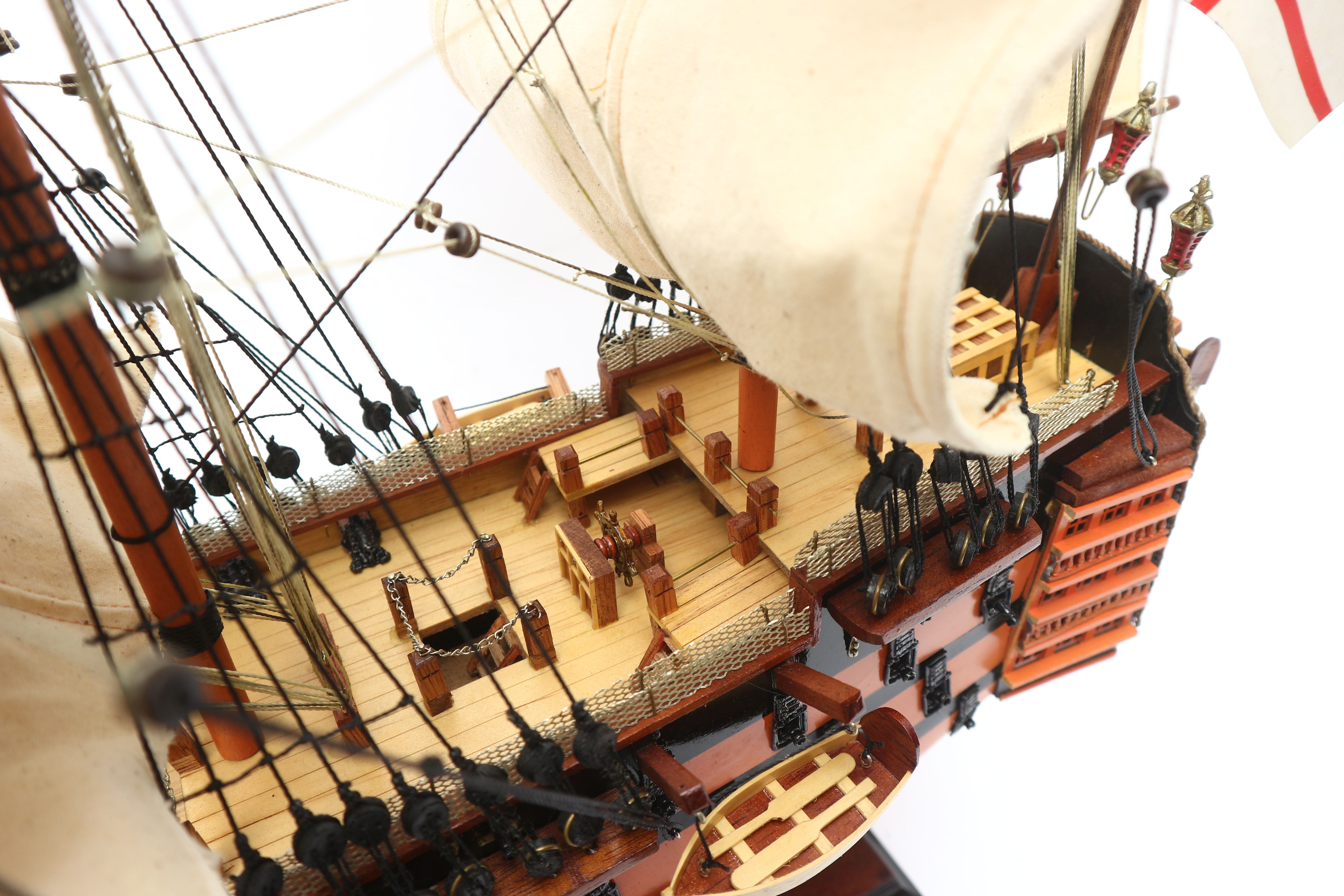 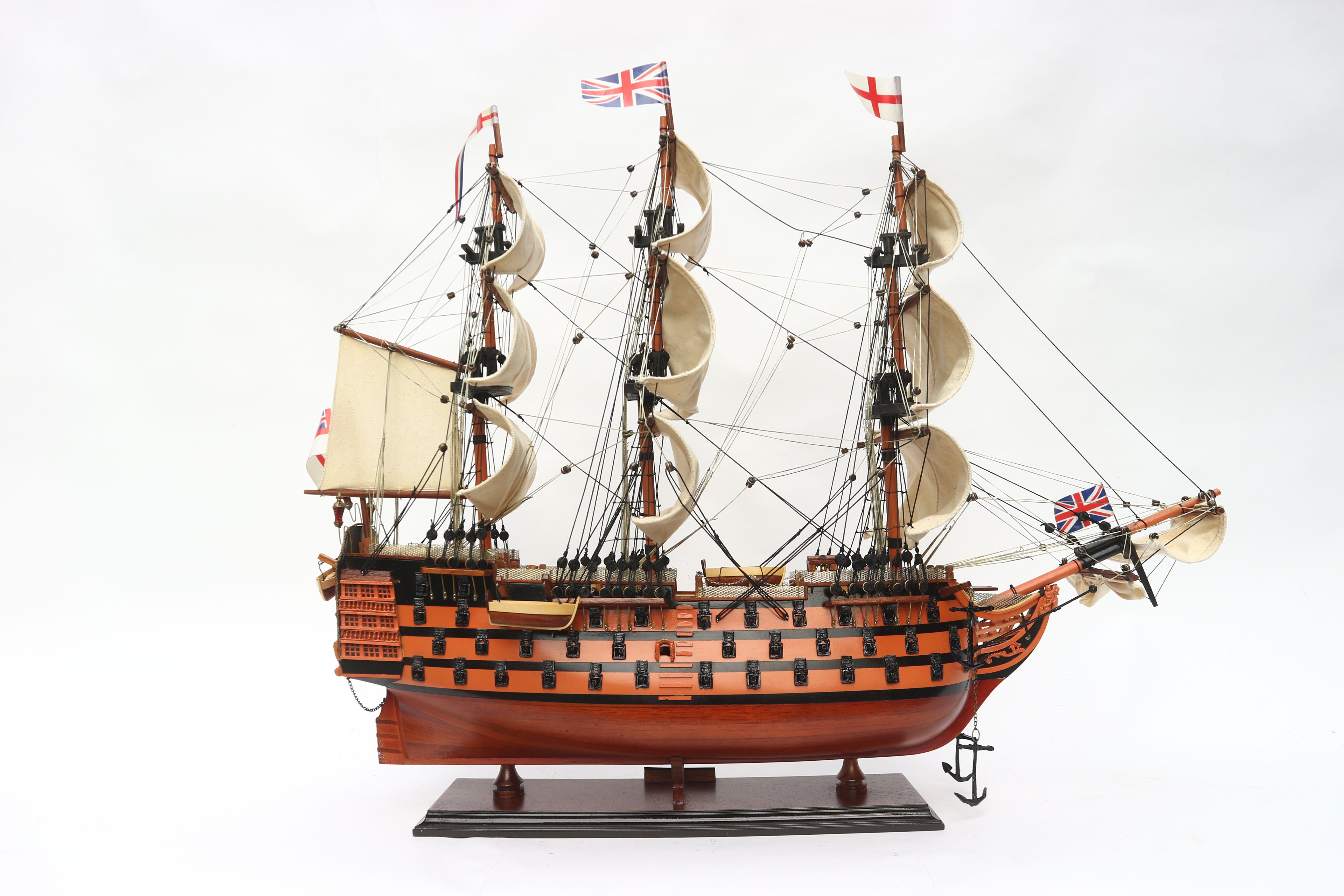 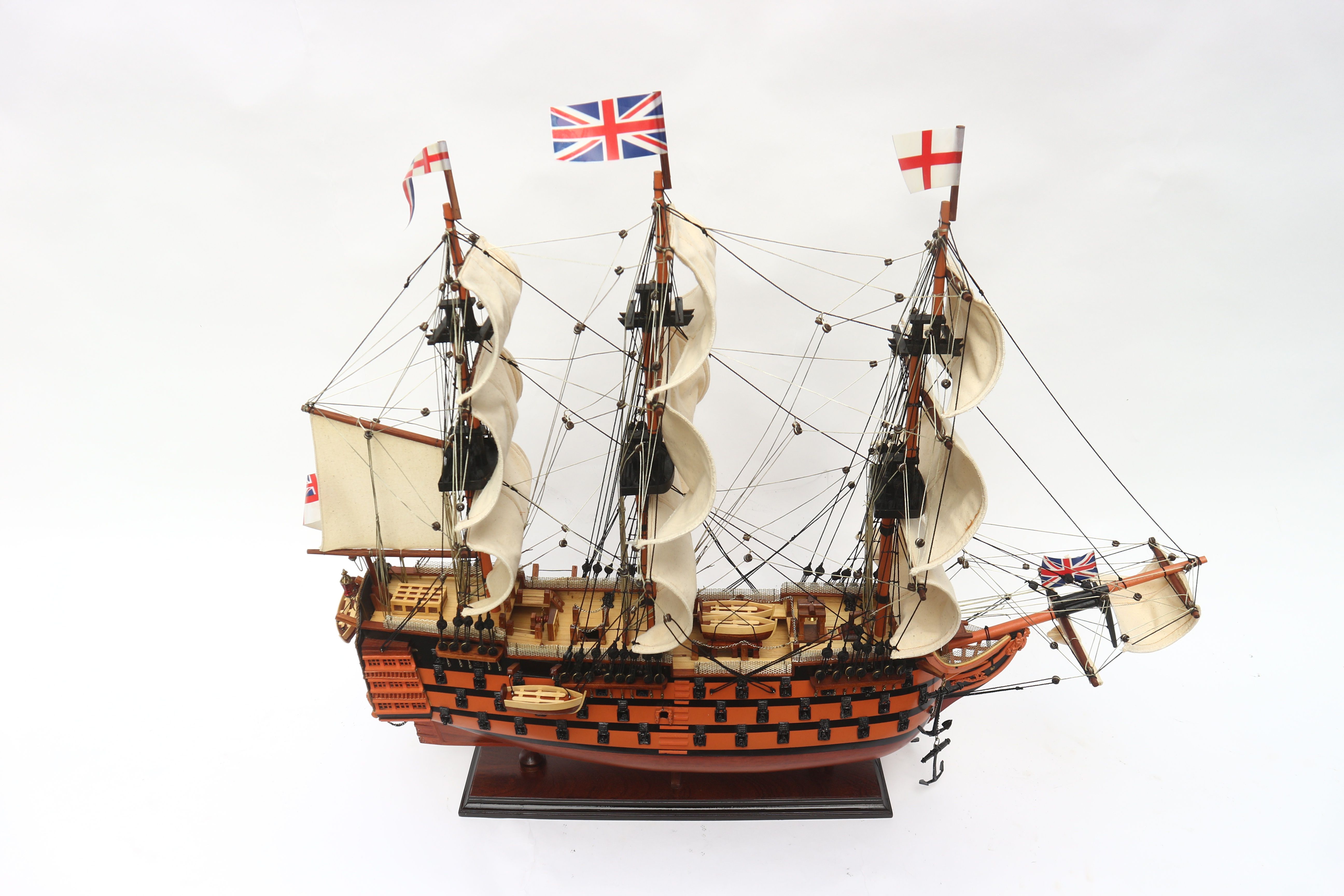 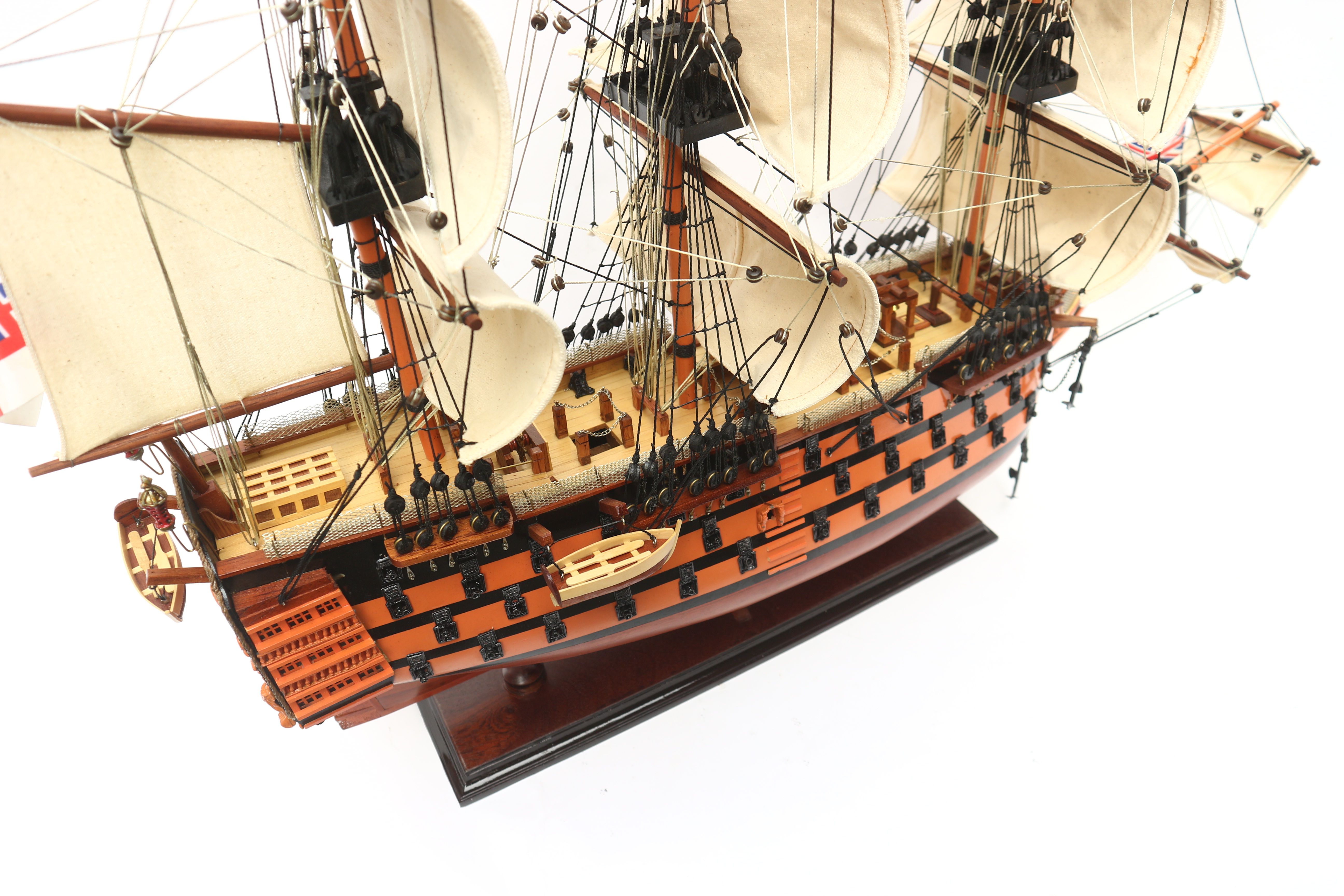 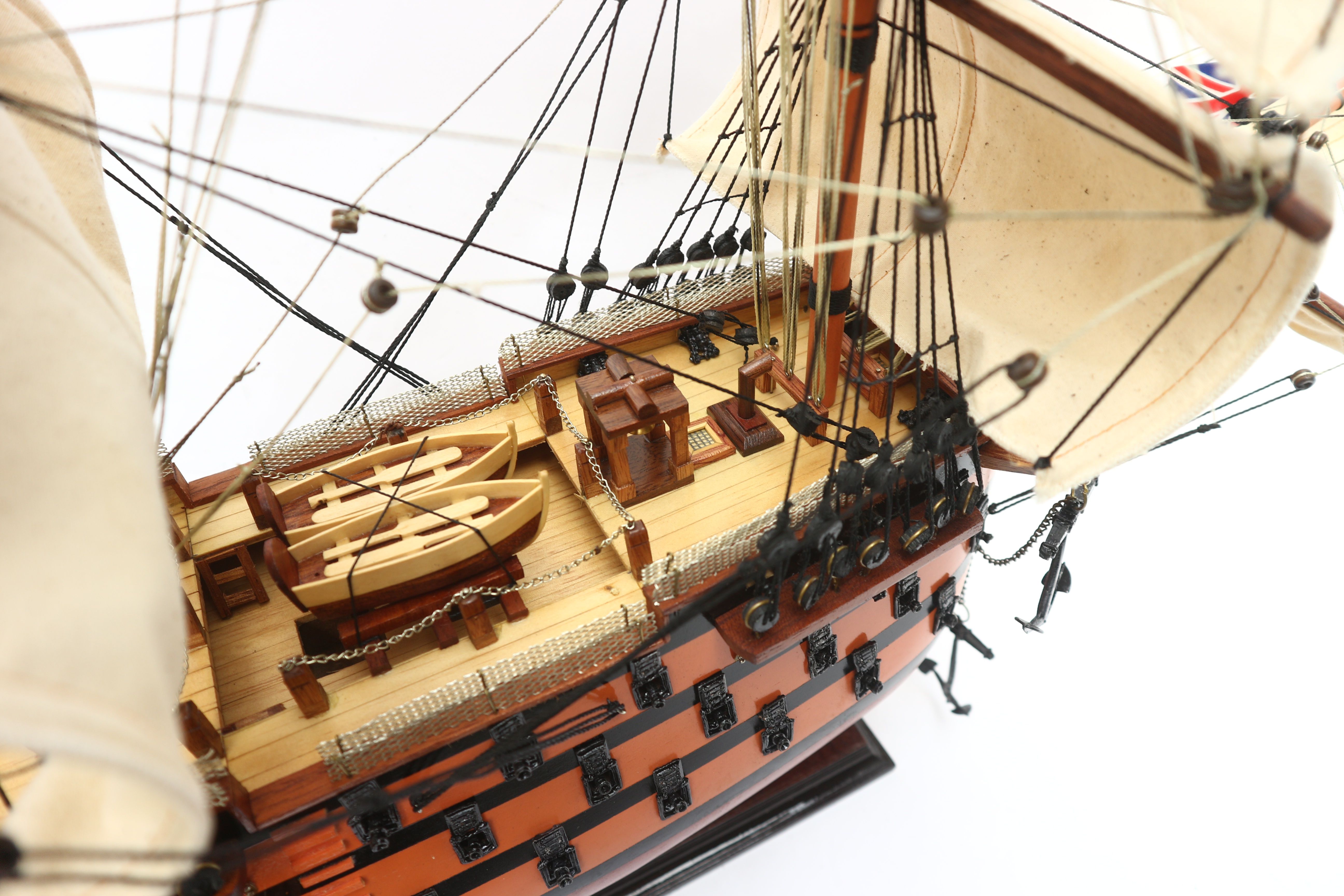 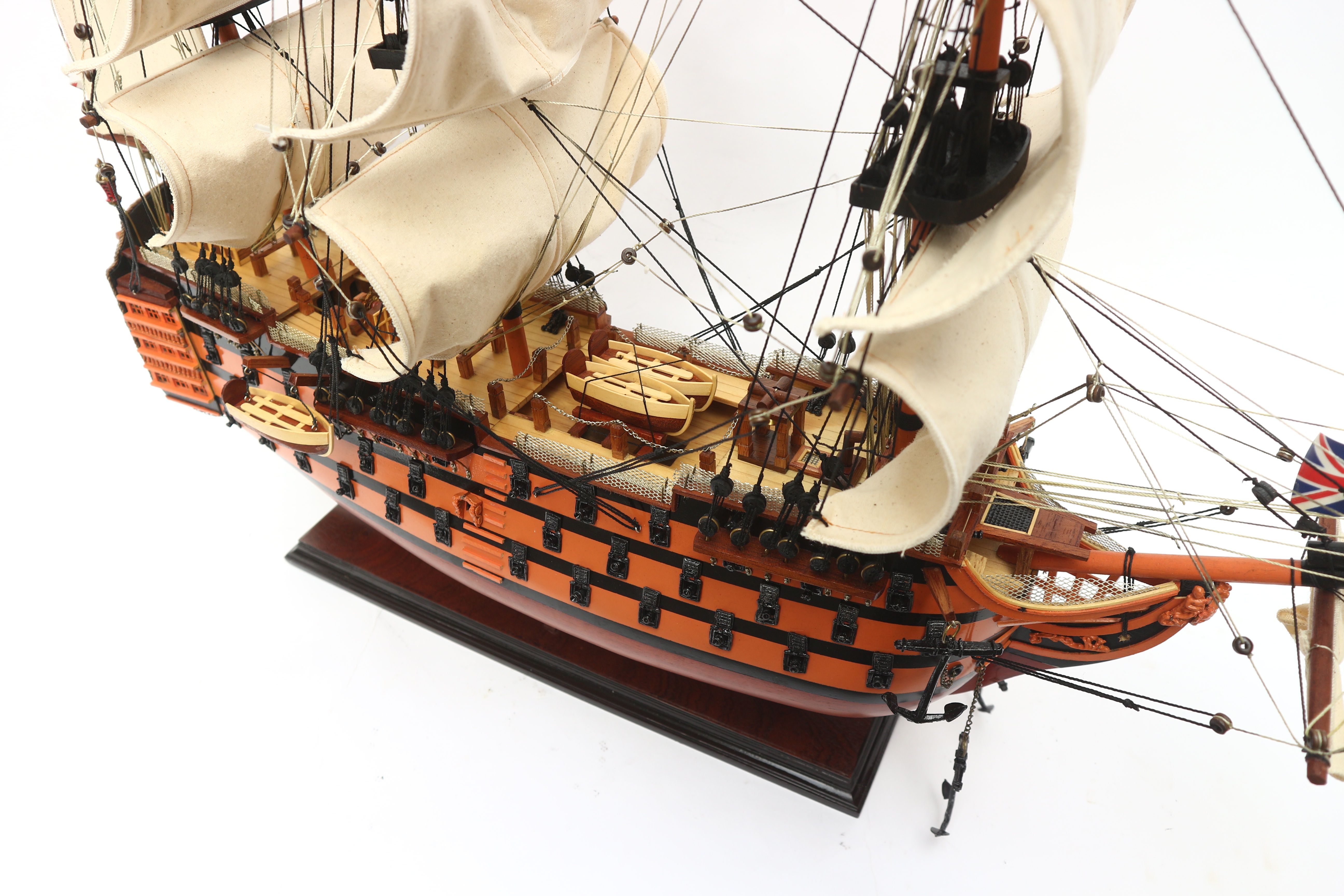 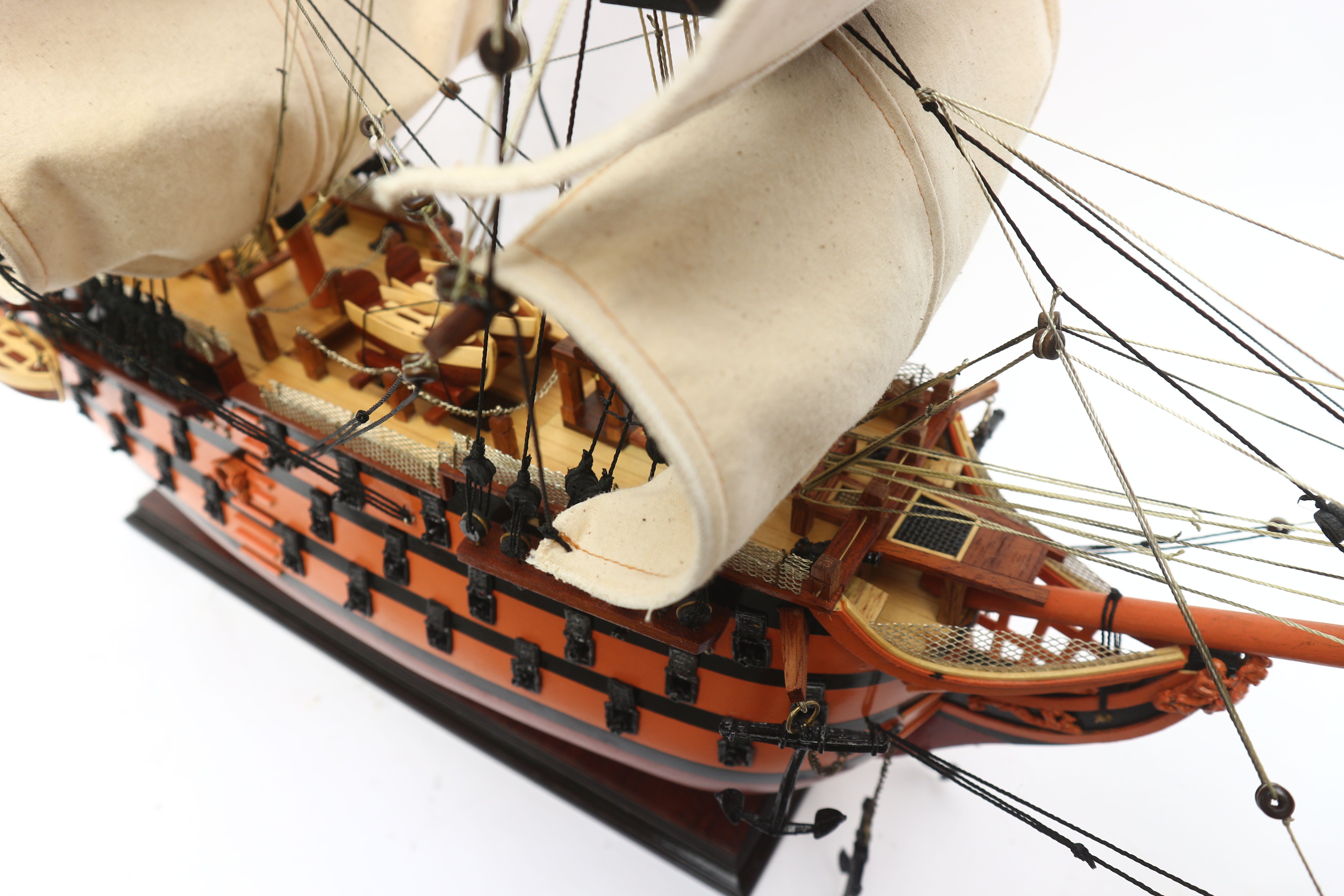 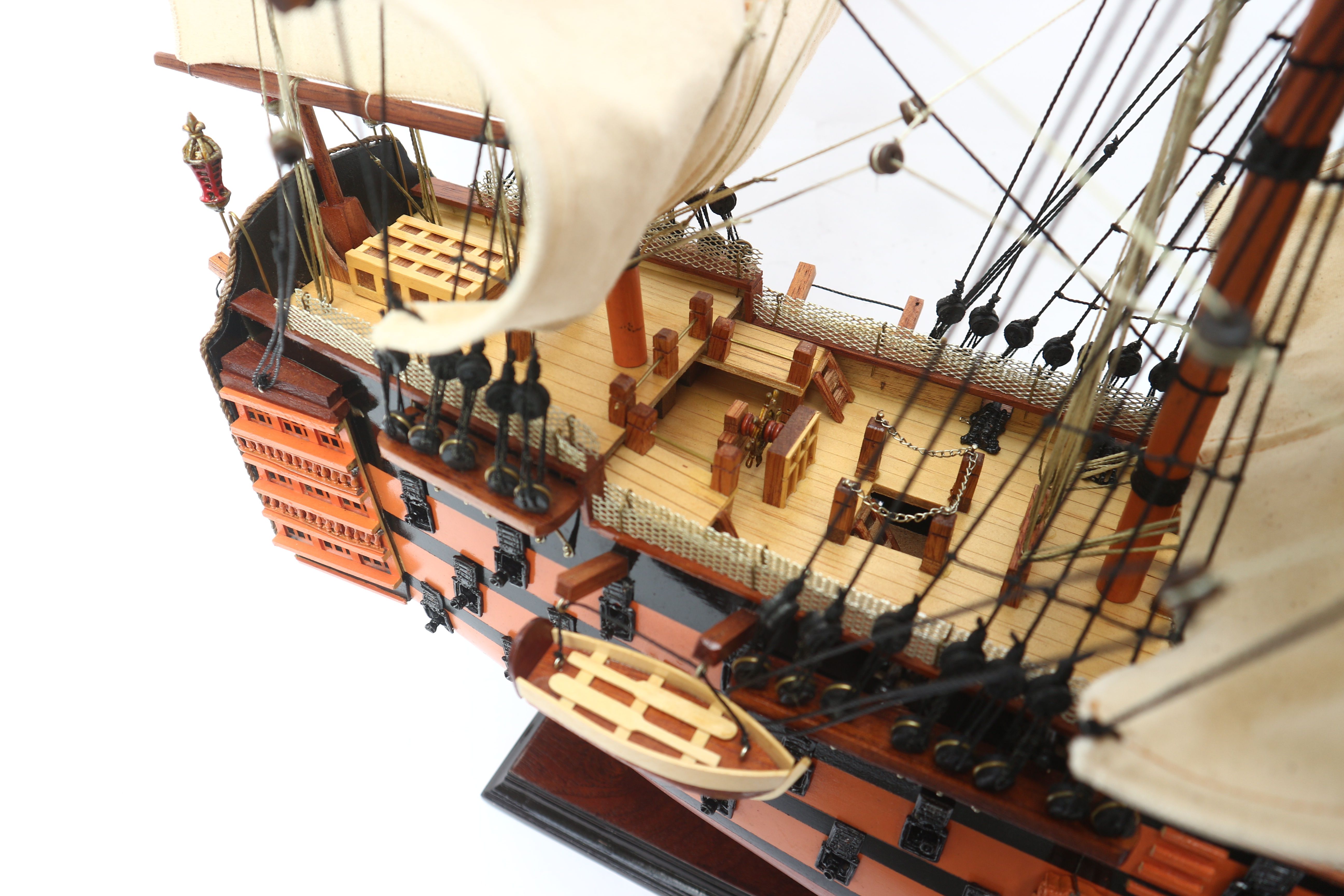 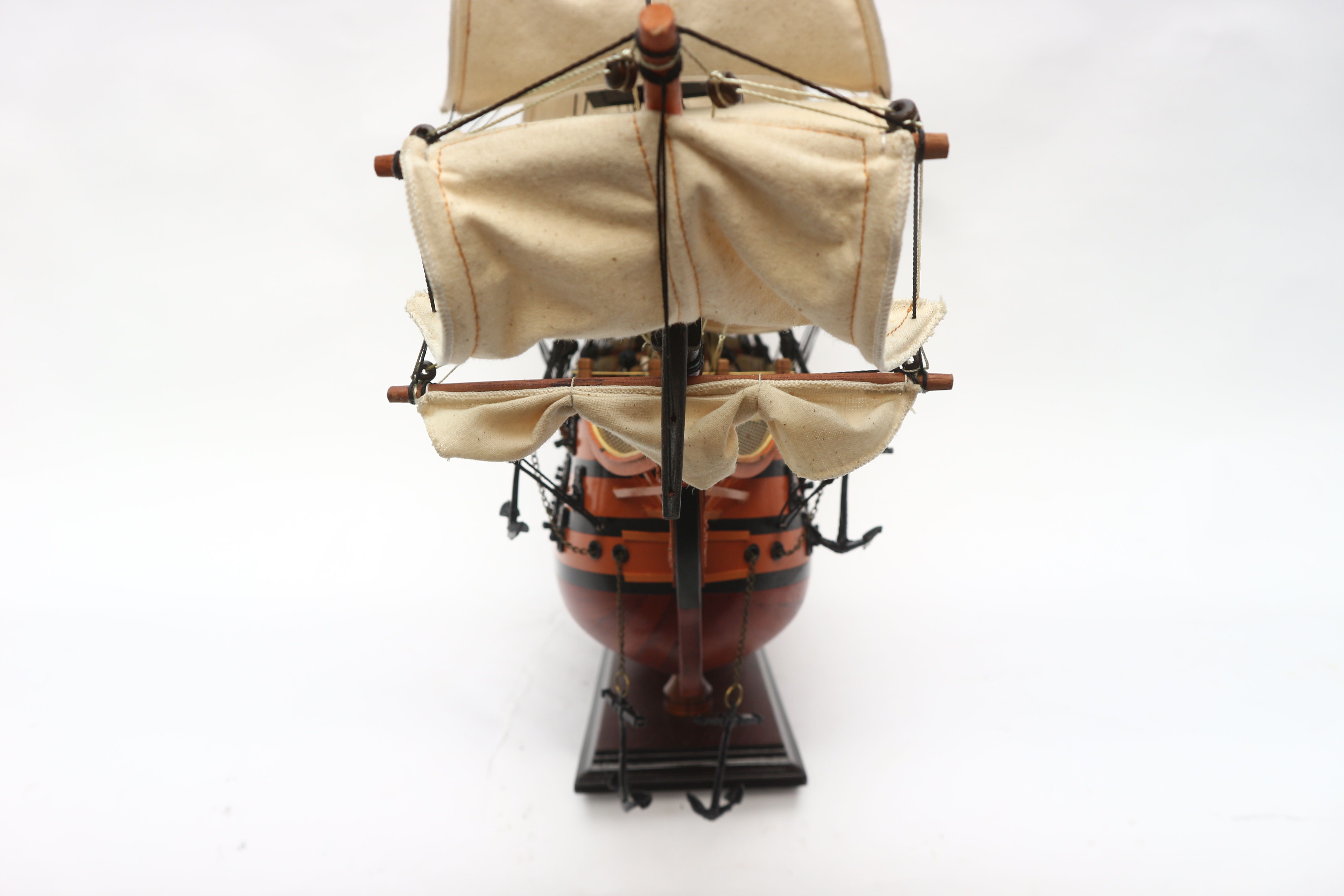 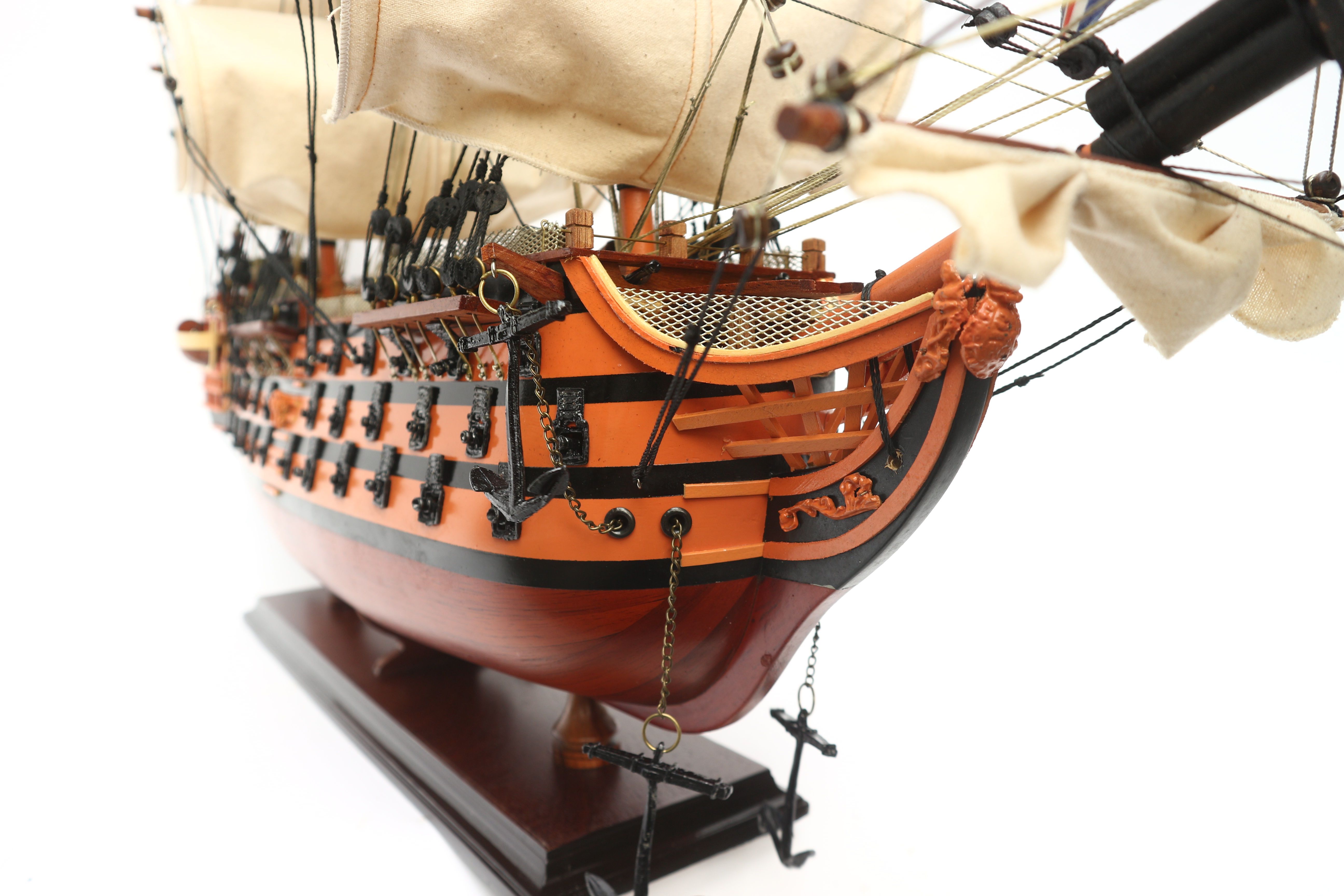 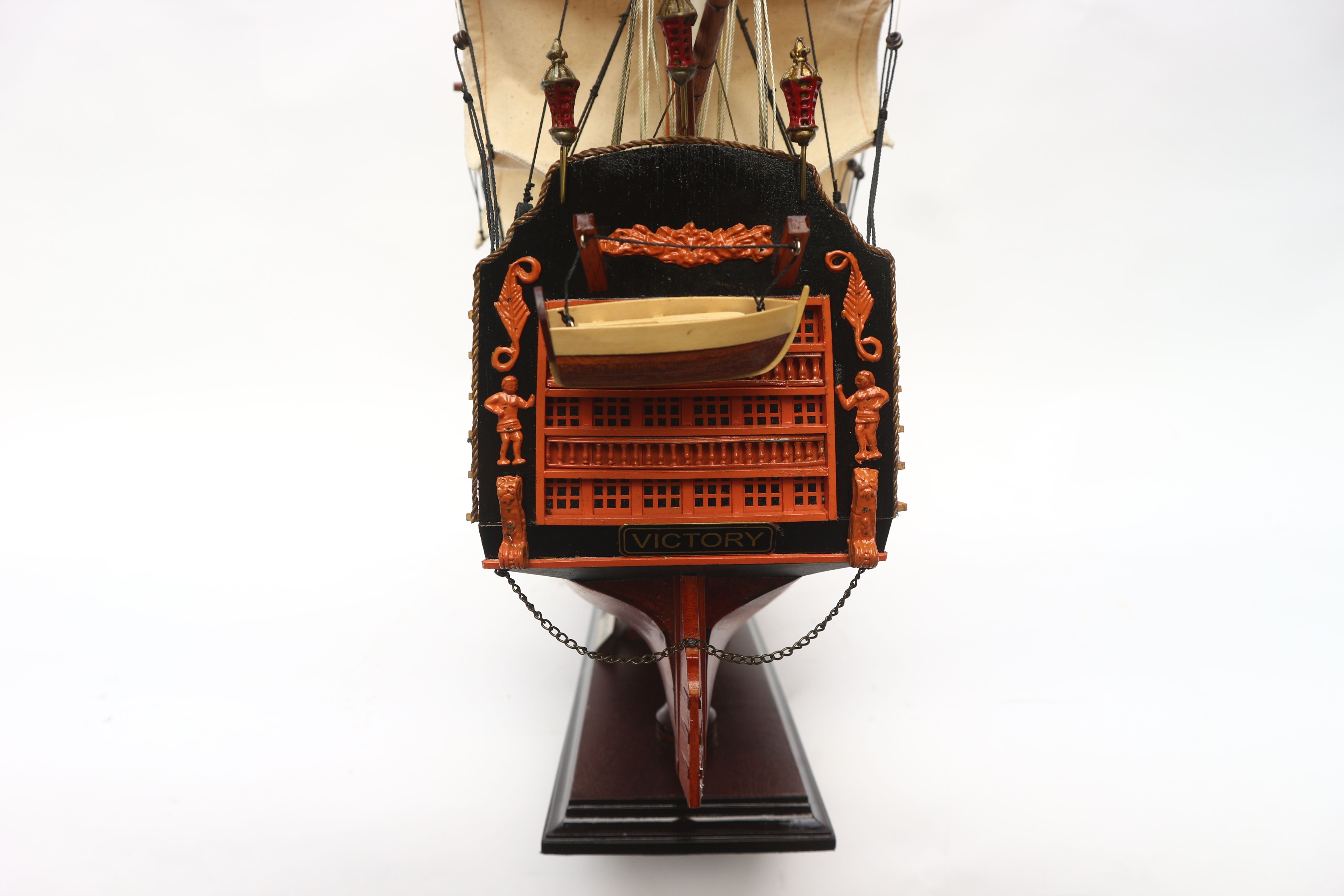 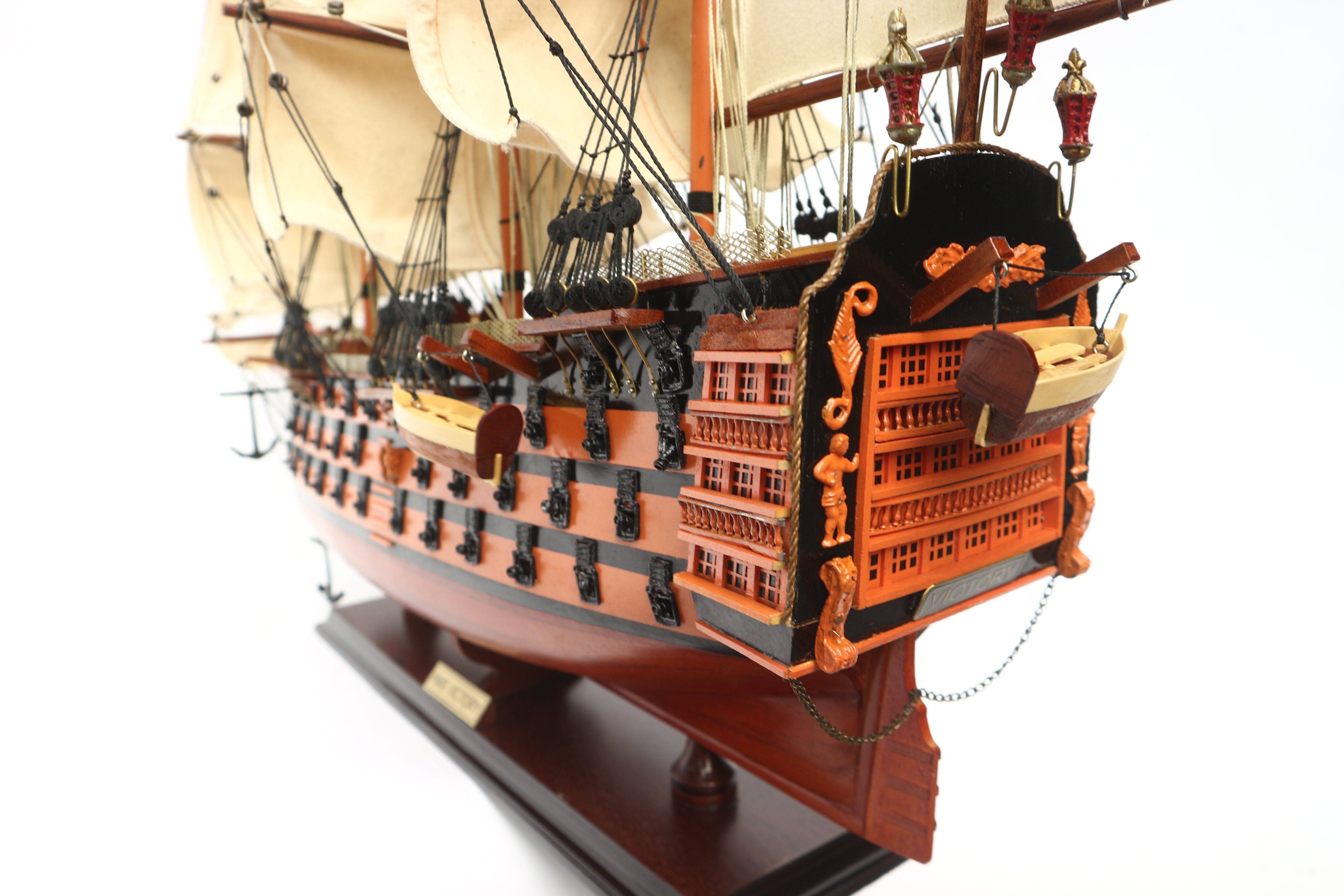 The HMS Victory was launched in 1765, but was not commissioned until 1778. When France signed a treaty of cooperation with the U.S., HMS Victory was made flagship of Admiral Sir Augustus Keppel’s Channel Fleet. In July 1778, she took part in an indecisive battle off Ushant, Brittany, where thirty-five of her crew were injured or killed. In December of that same year, she captured a French convoy off Ushant bound for America. In 1782, HMS Victory was Lord Howe’s flagship in the relief of Gibraltar. Paid off at Portsmouth the following year, HMS Victory remained in ordinary for eight years.

In 1792, HMS Victory became the flagship of Vice Admiral Sir Samuel Hood’s Mediterranean Fleet, which occupied Toulon and captured Bastia and Calvi (Corsica). The next year, Admiral Sir John Jervis broke his flag in HMS Victory. With only half as many ships of the line as the French and Spanish combined fleets, Jarvis consolidated his force at Gibraltar. On February 14, 1797 he sailed with 15 British ships to intercept a large Spanish convoy guarded by 27 ships of the line. The British broke the Spanish line and inflicted terrible damage on the Spanish flagships and captured a number of vessels. Their success was due in no small part to Admiral Lord Nelson, then in HMS Captain.

In 1800, it was decided to rebuild HMS Victory, and on May 16, 1803, she became the flagship of Lord Nelson’s Mediterranean Fleet. At this time, Napoleon had begun formulating plans for the invasion of England, and Nelson was ordered to contain Vice Admiral Pierre Villeneuve’s squadron at Toulon. Villeneuve arrived at Cadiz on August 21st and was blockaded by Nelson. Daunted by the prospect of an engagement with the British fleet, Villeneuve stayed put until Napoleon relieved him of command, but on October 21st, he turned back to face Nelson.

As the British lines approached the combined fleet (eighteen French and fifteen Spanish Ship of the line), Nelson ordered his most famous signal run up HMS Victory’s masts; “England expects that every man will do his duty”. HMS Victory was engaged by a number of French vessels including Bucentaure, Redoutatable, and Neptune. Nelson had insisted on wearing his full allotment of medals and decoration and at 1325, and he was wounded by a French sharp shooter. Nelson was taken below and at 1630, having been informed of capture of fifteen of the enemy ships, the hero of Copenhagen, the Nile, and now Trafalgar died.

Towed to Gibraltar by HMS Neptune, HMS Victory sailed for England on December 22, from where Nelson’s body was carried to St Paul’s Cathedral for a state funeral. His death was not in vain, for he had destroyed the French and any threat of a Napoleonic invasion of Britain. After a refit at Chatham, in 1808, HMS Victory re-entered service as the flagship of Sir James Saumarez’s Baltic fleet, which blockaded the Russian fleet and kept opened the supply of naval stores from Sweden. She remained in the Baltic until paid off in 1812.

Since 1824, HMS Victory has served as the flagship of the Commander in Chief at Portsmouth. In 1922, she was dry docked and opened as a museum. Ironically, she received her last battle wound in World War II, when a German bomb exploded in her dry-dock. Bennett, Nelson the Commander. Bugler, HMS Victory. Fraser, HMS Victory. Longridge, Anatomy of Nelson’s ships. McKay, 100-gun ship Victory. Mackenzie, Trafalgar role. Schom, Trafalgar.

To view other exceptional models built to exact specifications, browse our many other products or please feel free to Contact Premier Ship Models for with any questions you may have.