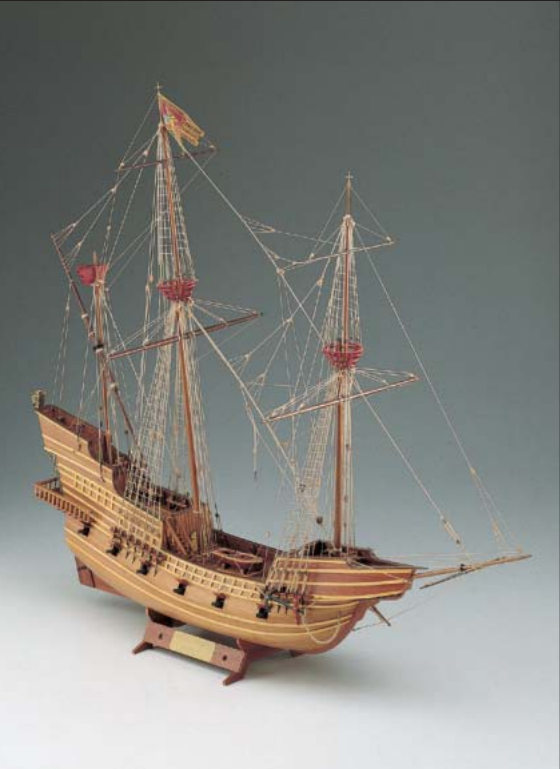 Galeone Veneto literally translates as Venetian Galleon, meaning this kit is a replica of a typical galleon ship built by the Venetians. The first traces of a galleon ship go as far back as the early 15th Century. The first galleons built were not intended for the high seas but for rivers and used oar propulsion for this purpose. The main deck had a castle-type structure, which protected those operating the oars from enemy attacks. The use of oar propulsion versus sail propulsion gave the ships greater maneuverability, which makes sense since they were used to sail on rivers.

The first galleons built for the high seas can be seen in the records of shipbuilders between 1526 and 1530, which is the period when the first Venetian galleon fit for the high seas was assumingly built. As you can see from the picture above, the ships had a very narrow beam and little deck space, which gave the ship a straighter edge and this helped to increase its speed. The poop deck, the deck situated above the cabin on the bow of a ship, was very high, as you can see in the picture as well.

The galleons had a large number of guns on the top deck. This made the top deck heavy and this combined with its narrow beam meant the galleons were liable to capsize. The ships used a square rigging, which made them perfect for long voyages but decreased their maneuverability. They did not have the same flexibility on the waters that lateen rigged boats did, so they were not ideal for trading or exploring. The development of the galleon mirrors the development of naval technological advancement, as more ships began to be equipped for the high seas.

Corel kits produce this model boat kit. Corel is an Italian manufacturer of highly detailed scaled replicas. They use the latest technology to create perfect ship model kits that our customers are frequently happy with. If you have any questions about this kit or any others, please do not hesitate to contact us.

This Vessel Type is Galleon
Copyright © 2021. US Premier ship Models. All Rights Reserved.