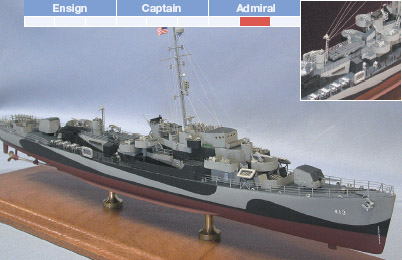 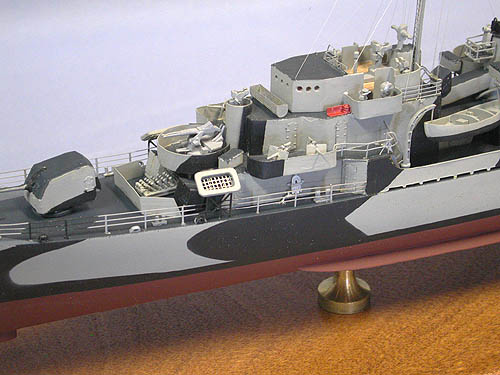 The USS Samuel B Robert (DE-413) was a John C Butler class destroyer escort of the US Navy.  The USS Samuel Roberts was named after Coxswain Samuel Booker Roberts, Jr, a Navy Cross recipient, and commissioned in April 1944.  She had a short career and was sunk in the Battle of Samar in October 1944.  The Samuel B. Roberts was part of a light flotilla of destroyers, destroyer escorts and escort carriers called the “Taffy 3” who were to prevent a superior Japanese force from attacking the amphibious invasion fleet off the Philippine Island of Leyte.  The Samuel B. Roberts steamed through a gauntlet of incoming shells; unfortunately, scored a torpedo hit and numerous gunfire and was finally sunk after engaging larger enemy warships.  She received the nickname of “destroyer escort that fought like a battleship”.

This model boat kit is based upon a design of revised plans and instructions by famed a WW II modeler. This boat model is detailed and accurate and contains a basswood hull, cast pewter fittings, laser cut wood parts, and a great deal of etched brass.