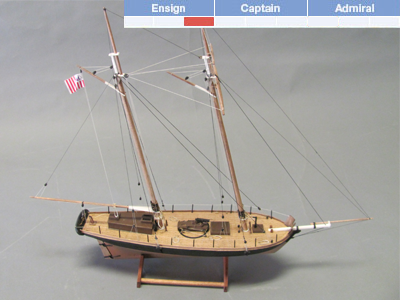 After the American Revolutionary War, the United States was financially struggling.  A national income was needed, so it was determined that import tariffs could provide a great deal of income.  The Revenue- Marine was created on August 4, 1790, by the United States Congress.  This was to enforce tariff laws against rampant smuggling. It was later renamed Revenue Cutter Service in 1894.

Under this legislation the “System of Cutters” ten vessels were ordered and constructed.  They patrolled the East Coast from Georgia to New Hampshire.  From 1790 to 1798 the Revenue-Marine was the only armed maritime service of the United States.  In 1915, President Woodrow Wilson signed Coast Guard Act.  This Service merged with the US Revenue Cutter Service and the United States Life-Saving Service to form the United State Coast Guard.

This is an entry level model.

Sorry we have no extra information for this product
This Vessel Type is Classic sailing boat
Copyright © 2021. US Premier ship Models. All Rights Reserved.