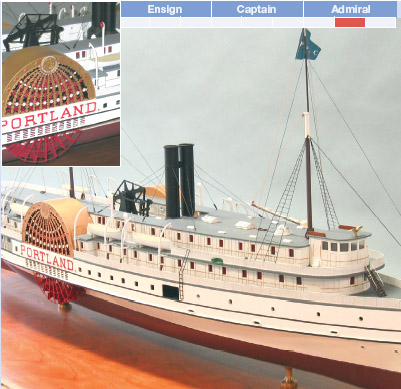 The Portland was lost in 1898 in the “Thanksgiving Day Storm”.  It is still considered the worst maritime disaster in New England.  Using sonar and remote-controlled cameras, scientists located the wreck north of Cape Cod in 2002.  Her discovery was documented on the History and Discovery TV channels.  The captain of this majestic ship, Hollis H. Blanchard, left Boston’s India Wharf on November 27, 1898, for an overnight voyage to Portland, Maine.  It is believed that he thought he could outrun an impending gale, however, two weather fronts collided at sea.  This storm took more than 450 lives and wrecked more than 400 vessels.

Each of her five decks, all windows and doors are laser cut.  Also included are etched brass railings, etched brass wheel covering and above deck walking beam machinery.