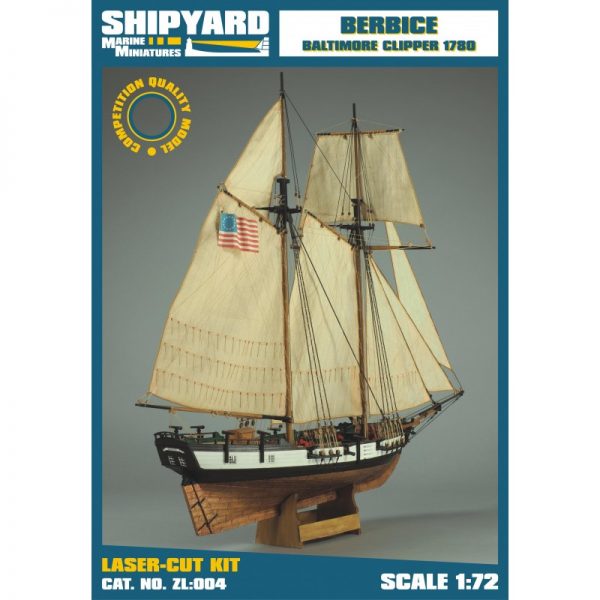 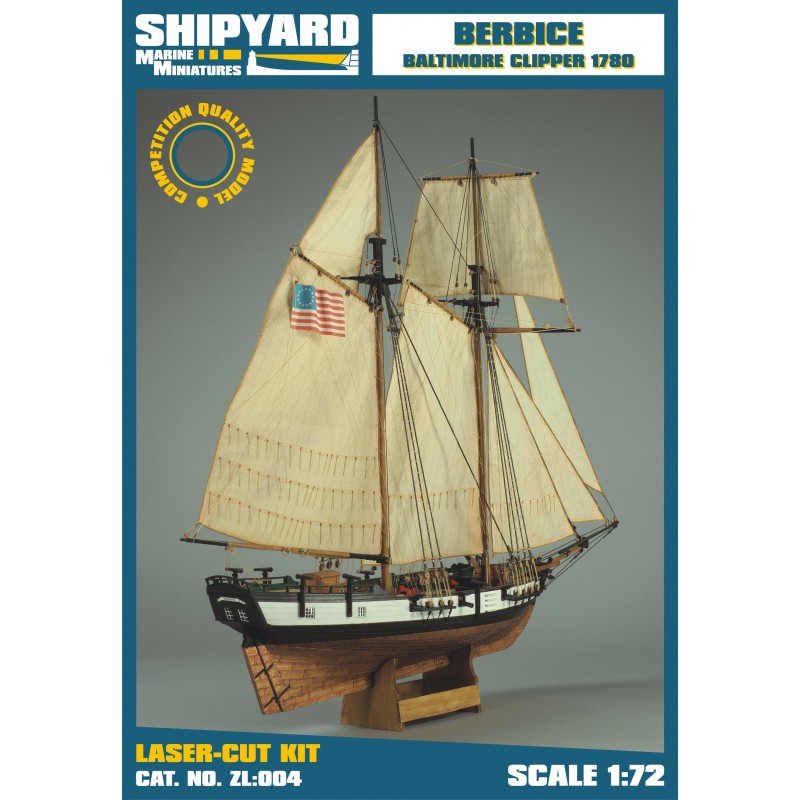 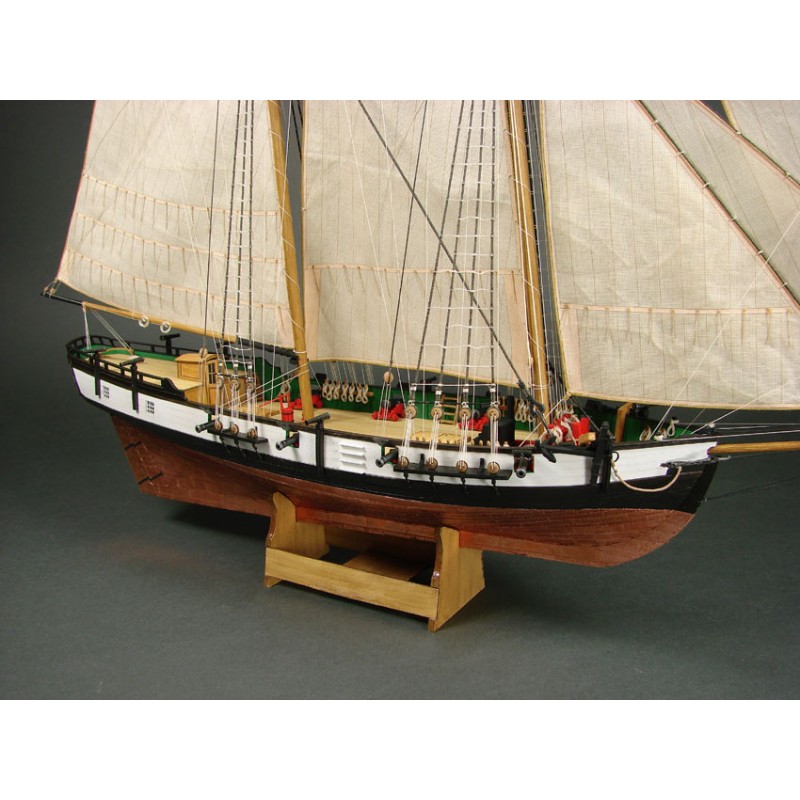 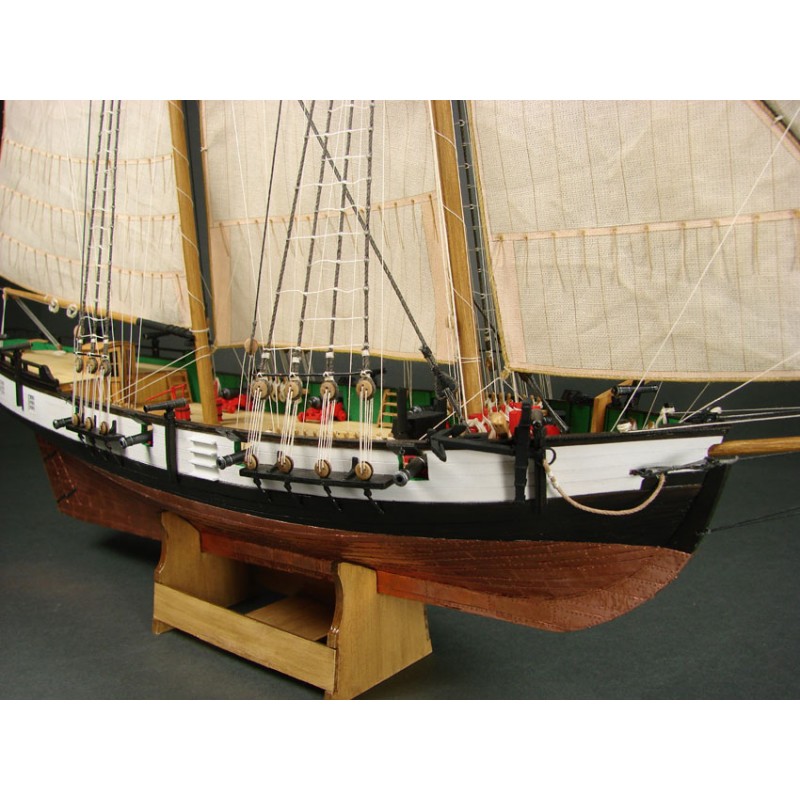 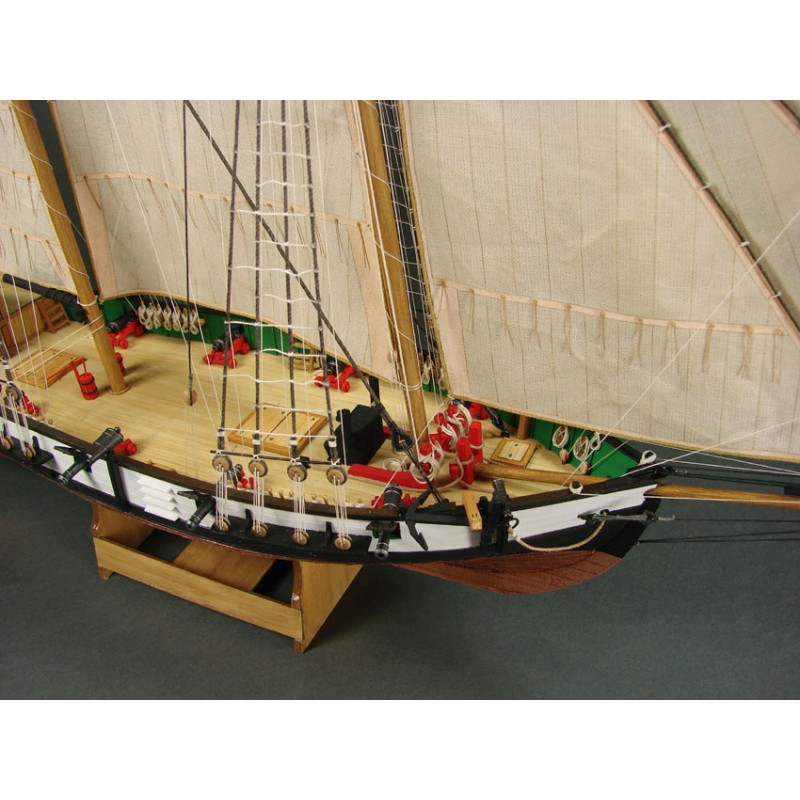 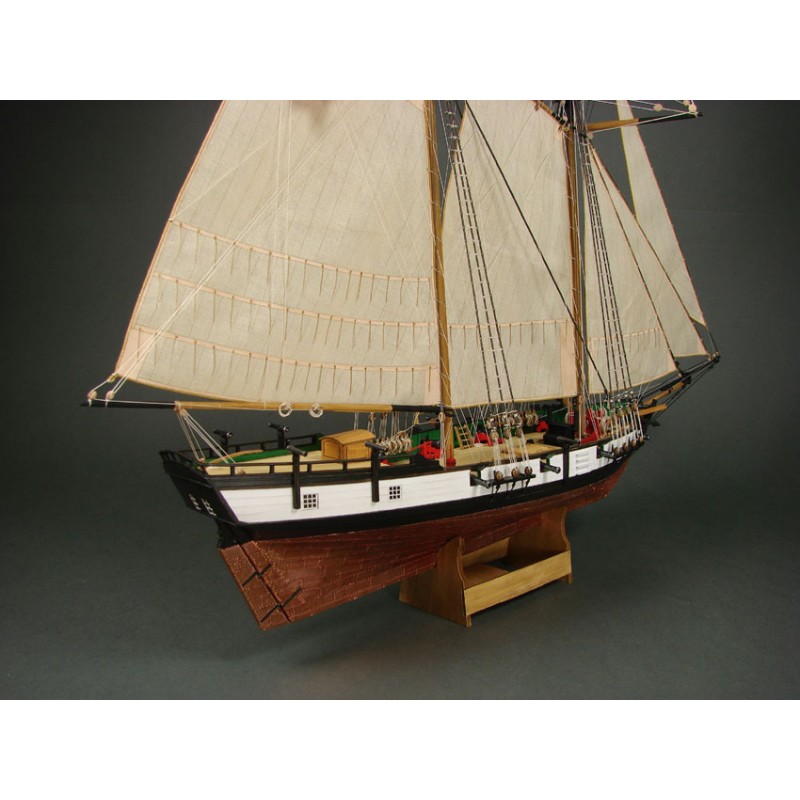 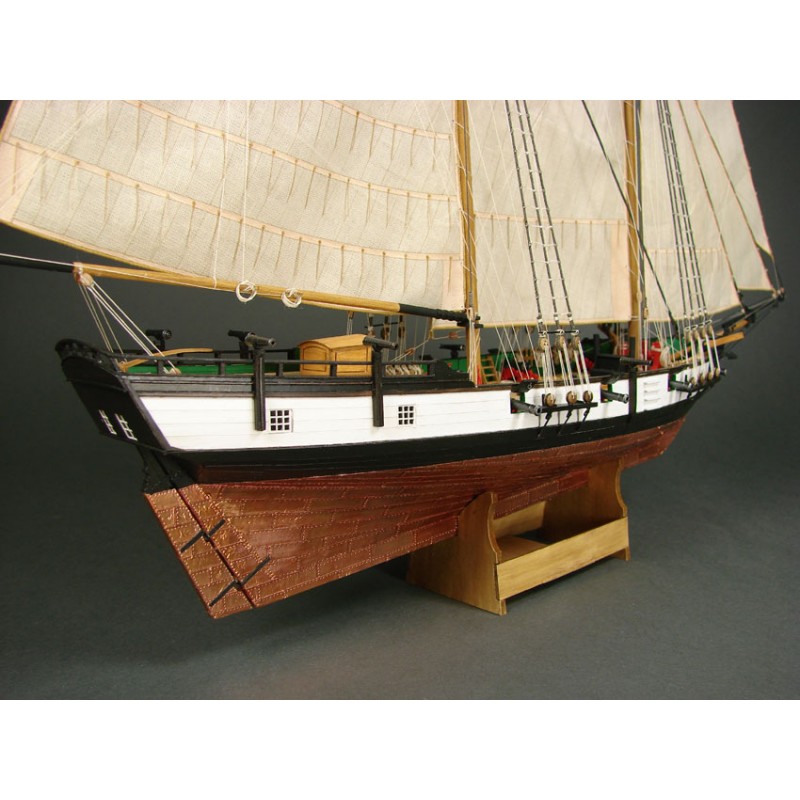 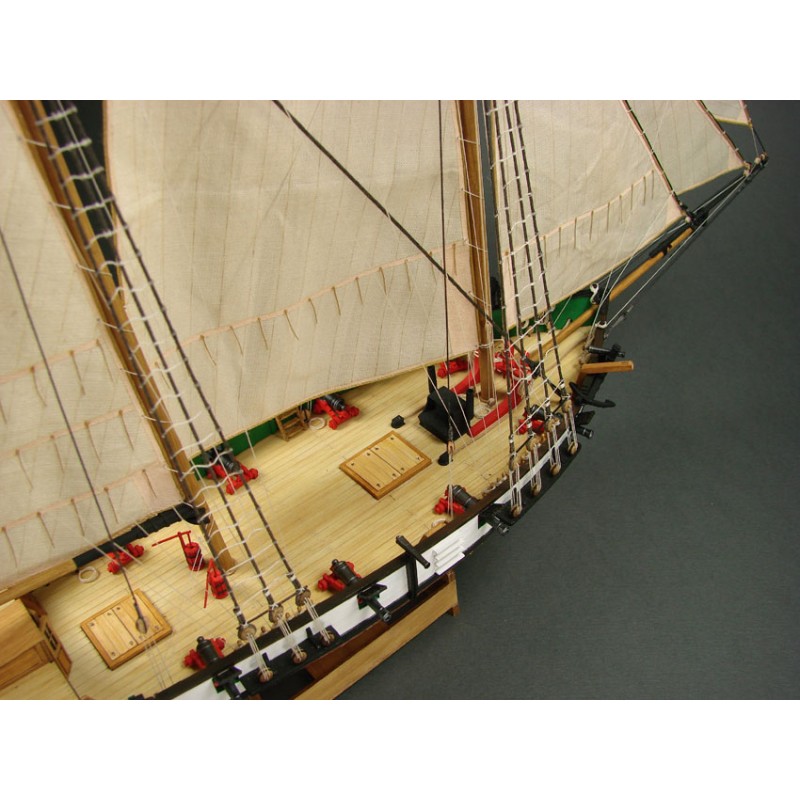 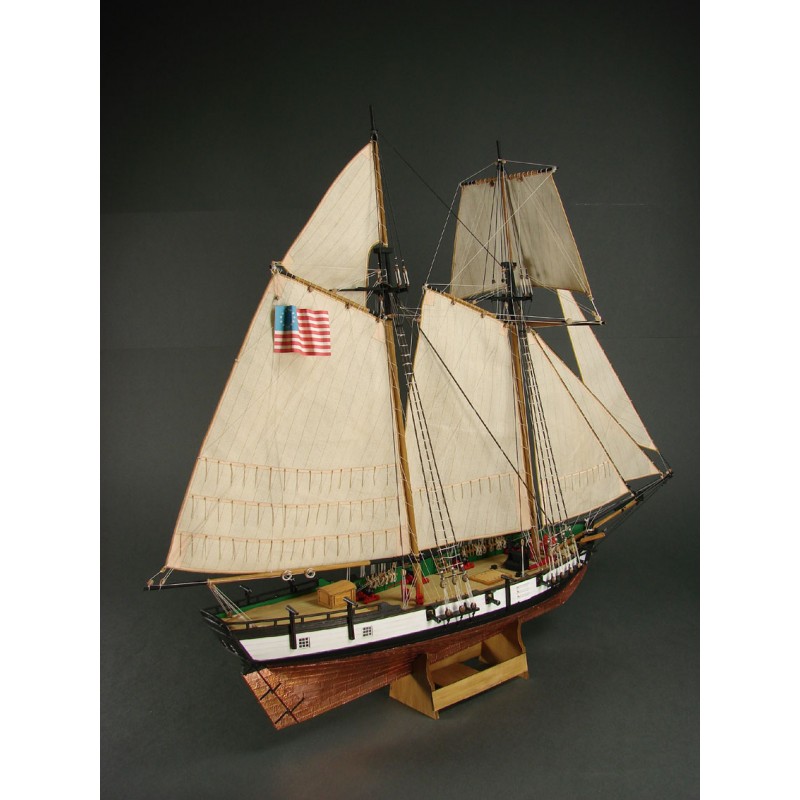 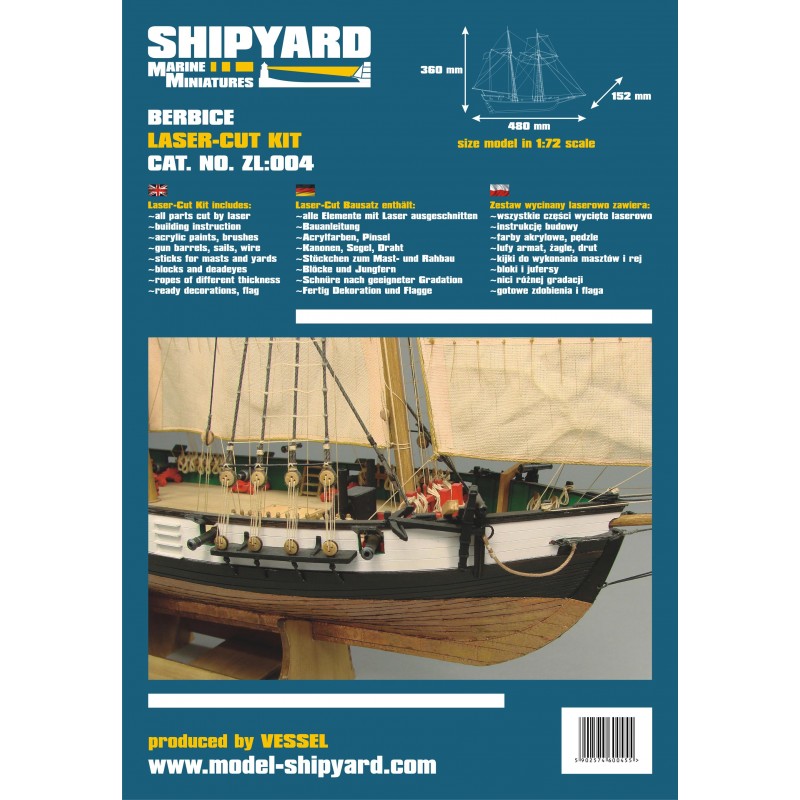 The Berbice 1780 Wooden Model Ship Kit is manufactured by Shipyard Models, who have a range of ready for assembly models built of wood. The kit includes all the parts and pieces to build and included are paints and sails for finishing touches on the model.

The Berbice was purchased by the British Navy in 1780 in the West Indies. For a short period she served as tender for Richard Hughes Flagship the HMS Adamant in this region, mostly stationed at Leeward Islands Station for this period. Upon being commissioned in July of 1781 her command was transferred to Lieutenant Thomas Boulden Thompson, who commanded her through 1782-83, although a curious incident in 1782 shows that although she was ship shape and ready, it was difficult to obtain the crew to man her. At the time the British Navy held a strategy of being twice the power of her two largest competitors and it is no surprise with the multitude of ships in the British Navy, there were occasions where there was insufficient manpower to equip the vessels.

Between 1784-86 she again returned under Adamant to England under command of Mr James Bremer. Circumstances leading to her condemnation in Antigua in 1788 are mysterious and similarly is the fact that the Berbice seems to have been recaptured and redesignated under the HMS Berbice in 1793. After participating in conflicts around the Caribbean she wrecked upon Scotsmans Head in Dominica in October of 1796 due to losing track of the vessel, the Lacedemonian, due to heavy rain. Plans of the ship where released in 1789 in a one page drawing entitled ‘A DRAWING OF HIS MAJESTY’S ARM’D SCHOONER BERBICE, THE 5TH AUG 1789’ which would later influence the construction of the ‘Baltimore Clipper’ in 1847.

Sorry we have no extra information for this product
This Vessel Type is Schooner
Copyright © 2021. US Premier ship Models. All Rights Reserved.